Collaborative efforts between carmakers are set to gain traction in India. Last week, India’s Mahindra and Mahindra Ltd (M&M) and America’s Ford Motor Co. said they would jointly develop a midsized sport utility vehicle (SUV). About a month ago, the country’s largest carmaker Maruti Suzuki India Ltd got roped into the cross-badging arrangement that its Japanese parent Suzuki Motor Corp. signed with Toyota Motor Corp. at a global level.

Is such enthusiasm justified when India’s carmakers are battling slowing sales and production cuts?

This is not the only reason for such alliances. Amid such skyrocketing growth forecasts, there is the conundrum of stiff competition and technological changes such as BS-VI emission norms and electric vehicles. Besides, the pace of new launches to woo customers requires strong research and development, and deep pockets. Ford Motor’s venture in the country clocked its first profit in FY17, a little more than two decades after it started India operations.

Given this, its alliance to jointly develop a midsized SUV with the country’s largest SUV maker M&M will help it make faster inroads into the market, with relatively lower risk. After all, it is not easy to compete with incumbents such as Maruti Suzuki, which rolls out one in every two cars sold in the country. South Korean Hyundai Motor Co.’s India unit is doing well in the No.2 position.

For Indian counterparts such as M&M and Maruti Suzuki, such collaborations help cope with rapidly changing technology. Toyota-Suzuki’s global alliance aims at jointly developing and marketing electric vehicles and expanding their presence in emerging markets, according to analysts. Therefore, Maruti Suzuki is a neat fit in the equation. Its dealer-showroom presence and small-car expertise gives Toyota room to grow in India and other emerging markets. 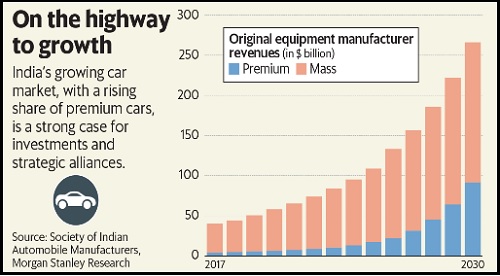 India has 3% of global car sales now, but will drive half the added global demand over 2017-30, said the Morgan Stanley report. Growth rates are also coming off in mature markets such as Japan, the US and the UK.

In other words, while every global carmaker will hope to cash in on this market, diversity, size and competition demands nimble-footedness. “Issues such as risk-sharing, technology platform-sharing, access to marketing channels and the need to generate optimum return on capital employed make a case for strategic alliances," says Kavan Mukhtyar, partner and leader at PwC India.

Meanwhile, such alliances may bring in adversities of cannibalization of market share and drop in sales volumes, notwithstanding the risk of failed alliances.

At present, the mood is grim as auto sales, including that of PVs, have faced a drubbing. Shares of Indian auto firms have ebbed from the year-ago highs as sales faced a drubbing. However, bets on India’s consumerism are high. As more companies try to enter and expand their Indian footprint, strategic collaborations may be the best way to minimize risk.

New telecom battle is over who will certify phones

`People Analytics`is the future of HR in India LinkedIn