Populist or prudent, economic growth contracted under both NDA, UPA

It’s pouring promises, as the biggest democratic exercise in the world gets under way. As always, the battle is between populism and fiscal prudence.

Hence, a peek into the manifestos of the incumbent Narendra Modi-led National Democratic Alliance (NDA) and the opposition United Progressive Alliance (UPA) is in order. 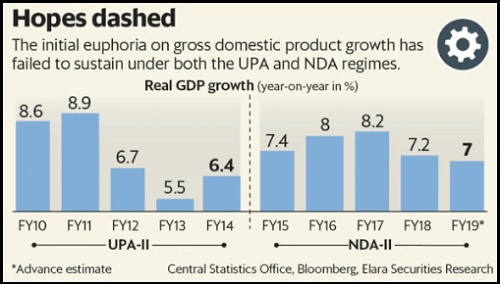 Analyses of some brokerage firms showed the former has avoided the temptation to promise large election sops but the latter appears more ambitious on social schemes.

“A look at the election manifestos of major parties reveals the usual ticking of the boxes of important issues such as farmer welfare, job creation, infrastructure build-up and housing. Despite the announcement by the Congress of a $52 billion social-spending programme that runs the risk of creating fiscal issues and possible tax increases, the BJP has been much more modest in its poll promises. However, the risk of competitive populism after the elections cannot be ruled out and would depend on the strength of the election mandate," brokerage CLSA Ltd said in a note on 8 April.

In terms of fiscal policy and finance management, both the governments in the past have resorted to unconventional measures to fund deficits, say analysts.

Whatever the strategy, economic growth under both regimes contracted towards the second half of their five-year terms (see chart).

Gross domestic product (GDP) growth was impacted by different domestic factors. “While the UPA regime suffered from policy paralysis, growth in the NDA regime was affected by demonetization and the goods and services tax. In the short run, the cash economy and non-regulated sectors were the most affected," Elara Securities (India) Pvt. Ltd said in a report released earlier this month.

Of course, weak global economic growth in some of these years would also have been a contributing factor.

That said, a common thread that has hindered growth under both the regimes is subdued private sector capital expenditure.

From its peak of ₹3.7 trillion in FY11, private capex has been falling for the past seven years, Motilal Oswal Securities Ltd said in a report on 25 March. During FY18, it hit its lowest level since FY07, declining 13% year-on-year to ₹1.5 trillion, it said.

Decline in private capex can be attributed to a variety of factors, including weak end-market demand, underutilization of capacity and overleveraged companies in key sectors such as steel, power and infrastructure.

In short, both the governments have failed to move the needle on private capex.

How soon would private capex revive? Past data suggest that it doesn’t immediately pick up post-elections. Unless that happens, maintaining the current pace of GDP growth will be challenging this year.

Opinion | The immediate challenges for the next finance minister