The mood on the Street is pessimistic. After June quarter results, earnings estimates of a large number of companies continue to be downgraded. In a report dated 16 August, CLSA said, “Numbers were cut for 54% of the stocks, despite only 36% of them missing estimates." The reason for this is that the broker adjusted numbers to account for the slowing economy as well.

Forecasts by other brokerage firms also echo the weakness in corporate performance. Analysts at Kotak Institutional Equities started the year with an estimate of 24% growth in earnings of Nifty 50 companies. After the first quarter results, earnings growth estimates have been cut to 15%. 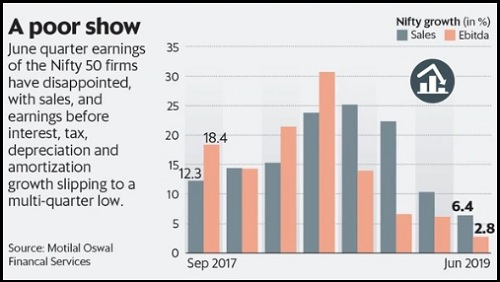 Worse still, with the economy engulfed in a spell of gloom, companies have begun cutting capital expenditure (capex) plans too.

Over the last six-nine months, the sharp decline in demand for consumer discretionary spends seen initially has spread to consumer staples too. On top of this comes the deterioration in the government’s fiscal position that has led to constraints on its ability to increase spends on infrastructure, or provide any other form of fiscal stimulus.

Kotak’s analysts say there could be further downgrades as the year progresses in “domestic consumption and investment sectors (automobiles, capital goods, construction materials, consumer durables) due to continued subdued demand conditions and (2) global commodity and IT sectors due to global economic slowdown".

Similar pessimism was also mirrored in the management commentaries that were subdued on demand pickup. In fact, most firms even deferred capacity expansion plans. JM Financial Services Ltd in its June quarter earnings report said that some firms in sectors such as auto and auto ancillary, metals, industrials, and building materials have cut their capex guidance in Q1 FY20. A few firms in industries such as oil and gas, telecom, and utilities have retained their capex plans.

This is not surprising given that most companies put up a disappointing operating performance. Earnings before interest, tax, depreciation and amortization growth for the Nifty 50 companies was the lowest in eight quarters. The primary cause was growth in revenues that was the weakest since December 2016, which in turn led to poor operating leverage.

With expectations of a stimulus package from the government not being met, the Nifty 50 and broader indices have corrected substantially since July 2018. There was no respite after the June quarter, as earnings were dismal. Still, the Nifty 50 looks expensive at 19.7 times estimated FY20 earnings, despite several of its constituents trading at a substantial 30-40% discount to their respective long-period average valuations.

Opinion | The immediate challenges for the next finance minister