* In economic news, WPI for July is scheduled to be released today.

* US dollar edged higher against a basket of currencies on the news of US's delayed tariffs on China.

* Japan’s yen edged higher as concerns over future trade talks persist even after the U.S. delayed tariffs on some Chinese imports until mid-December.

Demand for safe haven assets amid global political uncertainty weighted on the emerging markets currencies, which in turn dragged the Indian rupee yesterday that hit a six month low. Foreign fund outflows and sell-off in the domestic equities also kept the currency markets under pressure. Local unit yesterday opened at 71.15 a dollar and moved in a range of 71.02 and 71.40. Rupee ended the session at 71.40 against its previous close of 70.78 on Friday.

On Monday, markets were closed on the back of Bakri-Id holiday. FIIs were sellers in the capital market segment; offloaded shares worth Rs 638.28cr as per exchange's provisional figures on 13 Aug. DIIs, on the other end were buyers to the tune of Rs 201.53cr on the same day. After market hours, domestic retail inflation came out that marginally eased to 3.15% in July against an eight month high of 3.18% in the previous month.

Now, the markets will turn focus towards WPI that is scheduled to be released today. For USD pair, 71.50 will be major resistance above which it may likely touch 71.75. On the downside 71.03 and 70.75 are the support levels. 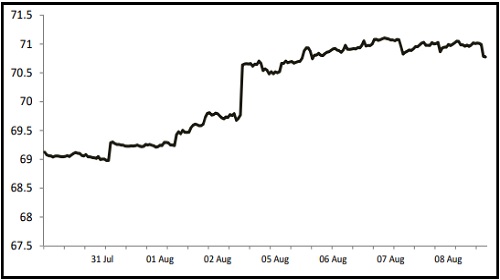