* Bullion prices gained as investors sought the safe-haven asset amid mounting fears about the coronavirus outbreak. However, a firm dollar limited gold's gains. Prices rebounded as fears about coronavirus outbreak resurfaced after the Centers for Disease Control and Prevention confirmed the second case of the virus in the U.S. Traders remained anxious about the spread of the virus as China gears up to celebrate the Lunar New Year from this weekend, a peak period for travel and gold demand in the region.

* The European Central Bank held its key interest rates, asset purchases and forward guidance unchanged, and announced the launch of a review of its monetary policy strategy. The Governing Council, led by ECB President Christine Lagarde, decided to keep the refi rate unchanged at a record low 0 percent, the deposit rate at -0.50 percent and the marginal lending rate at 0.25 percent. The move was in line with economists' expectations. The previous change was a 10 basis points cut in the deposit rate in September.

* In a meeting with European Commission President Ursula von der Leyen in Davos, Trump again threatened to levy tariffs on European car imports in the absence of renewed trade commitments from the bloc. China announced that it is closing transportation networks in Wuhan, the city at the center of the outbreak, and urge citizens not to leave. The decision ahead of the Lunar New Year holidays, where hundreds of millions are expected to travel to the country for holidays

* The International Monetary Fund on Monday cut the global growth forecasts for this year and next, mainly due to the weaker-than-expected expansion in India. Global growth for this year is projected at 3.3 percent, which is 0.1 percentage point less than the forecast made in October, the international lender said in the latest update to its World Economic Outlook report. The growth rate is projected to rise to 3.4 percent next year, which is 0.2 percentage points less than the October forecast. The growth estimate for 2019 was lowered to 2.9 percent from 3.0 percent.

* Physical gold demand was subdued in major Asian hubs this week on account of the Lunar New Year holidays, with growing fears the coronavirus outbreak in China could further dampen activity. China, the world’s biggest gold consumer, is ramping up measures to contain a virus that has killed 26 people, suspending public transport in 10 cities, shutting temples over the Lunar New Year and even closing the Forbidden City and part of the Great Wall. In India, dealers offered discounts of up to $11 an ounce over official domestic prices, which includes a 12.5% import tax and 3% sales tax, unchanged from the last week. 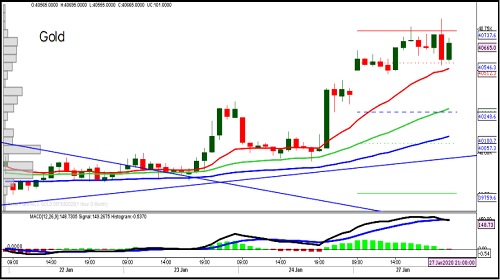 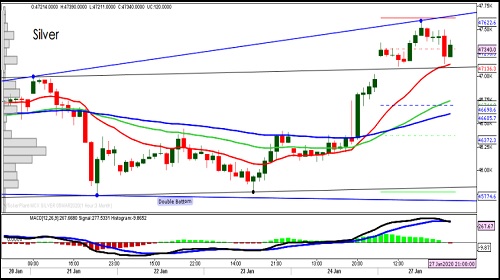 * Crude oil settled down on concern that the spread of a respiratory virus from China may lower fuel demand if it stunts economic growth. U.S. crude oil and distillate inventories fell last week, the Energy Information Administration said. The U.S. bank maintained its forecasts for Brent to average $67 a barrel in the first quarter and $64.50 a barrel throughout 2020. U.S. crude stockpiles rose last week by 1.6 million barrels, against expectations of a drop, the American Petroleum Institute said.

* Libya's National Oil Corporation declared force majeure on the loading of oil from two major oil fields after the latest development in a long-running military conflict saw forces loyal to commander Khalifa Haftar ordering the shutdown of facilities in the east and south of the country. Meanwhile China’s data showed its gasoline exports are surging, rising nearly a third last year as more new refineries are opened.

* U.S. oil output from seven major shale formations is expected to rise about 22,000 barrels per day (bpd) in February to about 9.2 million bpd, the U.S. Energy Information Administration said in a monthly forecast. Output at the largest formation, the Permian Basin of Texas and New Mexico, is expected to rise 45,000 bpd to 4.80 million bpd, while production declines are forecast in the Eagle Ford, Niobrara and Anadarko basins.

* Natural gas dropped on forecasts for mild weather through early February and a decline in gas prices in Europe and Asia that cause some U.S. liquefied natural gas (LNG) exporters to temporarily shut their plants. Meteorologists projected that weather in the U.S. Lower 48 states will remain mostly warmer than normal through Feb. 8. This winter so far has been milder than usual with average daily temperatures 3 degrees Fahrenheit higher than normal in December and 5 degrees higher so far in January

* US natural gas output in major shale formations is expected to rise by the smallest in about a year in February to record highs, the U.S. Energy Information Administration (EIA) said, as producers pull back on new drilling. U.S. gas output in the big shale basins was projected to increase less than 0.1 billion cubic feet per day (bcfd) to a record 86.0 bcfd, its smallest monthly increase since a drop in January 2019. Low U.S. gas prices are also expected to prompt companies to keep cutting spending on new drilling. Meanwhile, U.S. gas output in the Appalachia region, the biggest U.S. shale gas formation, was set to decline less than 0.1 bcfd to 33.3 bcfd in February from 33.4 bcfd in January. 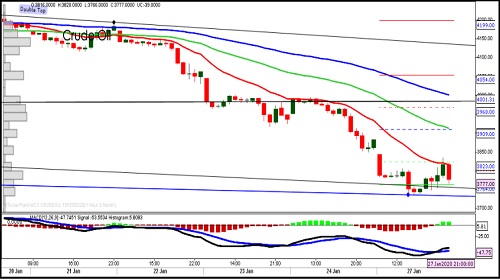 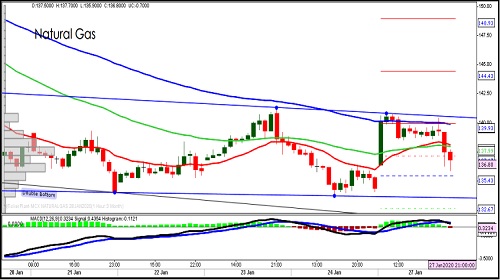 * Base metals dropped on concerns that the spread of the coronavirus could hit the Chinese economy and metals demand. United States wants to conclude a trade deal with the United Kingdom this year, U.S. Treasury Secretary Steven Mnuchin said.

* Copper settled down a jump in inventories and the spread of a flu-like virus in top metals consumer China weighed on prices, even with production closures looming in Africa. Pressure also seen as fears mount that the coronavirus will hit economic growth. Copper inventories in warehouses monitored by the Shanghai Futures Exchange rose 15.6% from last Friday, data showed. Prices were also affected by traders closing positions ahead of the Lunar New Year in China.

* China's scrap metal imports in 2019 fell 41.5% year-on-year, with the December intake sinking by 75.2%, customs data showed. The LME cash contract's discount to three-month copper was near its highest since early October at $33.50, pointing to plentiful supply of the metal. Antofagasta reported a 5.8% drop in fourth-quarter copper production, citing civil unrest in Chile, though it still registered record annual output.

* Nickel settled down as investors remained anxious about the spread of the virus in China just as millions prepared to travel for the Lunar New Year. Indonesia's 2019 nickel ore output stood at 52.8 million tonnes, an official said on Thursday, more than double that of a year earlier. The global nickel market deficit tightened to 1,266 tonnes in November from a shortfall of 3,077 tonnes the previous month, the International Nickel Study Group said. Indonesia had exported 3.04 million tonnes of nickel ore worth $118.6 million in December, data from the statistics agency showed.

* On the trade front, US President Donald Trump told that the European Union has “no choice” but to agree to a new trade deal. In a meeting with European Commission President Ursula von der Leyen in Davos on Tuesday, Trump again threatened to levy tariffs on European car imports in the absence of renewed trade commitments from the bloc. 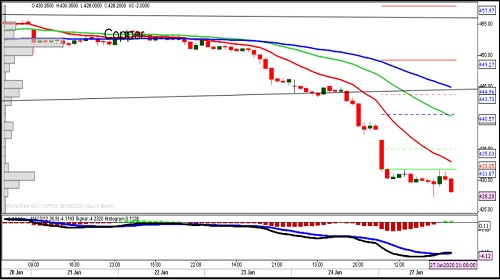 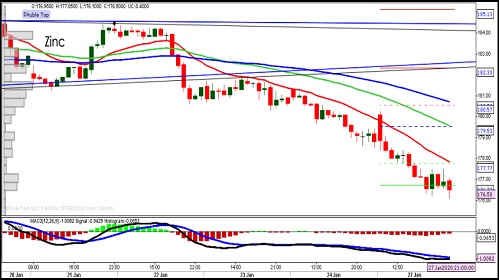 Views express by all participants are for information & academic purpose only. Kindly read disclaimer before refering below views. Click Here For Disclaimer

What Has Honda Changed On The New Unicorn BS6?