Is the smart meter programme under UDAY really smart?

* Incorporated in 1989, Power Grid Corporation of India (PGCIL), a 'Navratna' CPSE, is India's largest electric power transmission utility company and is the third largest transmission utility in the world. PGCIL owns & operates a transmission network of 1,58,298 ckm of inter-State transmission lines, 245 substations with transformation capacity of 371,912 MVA as on FY19.

* Further, the company operates in three businesses namely transmission (~95-96% of consolidated revenue), telecom and consultancy business. (together constitute 3-4% of its total revenues). PGCIL Q1FY20 numbers were largely in-line with street expectation. Its revenue grew by 8% YoY to Rs. 8804cr. EBITDA grew by 14% YoY to Rs 7,896cr while net profit came in at Rs 2,427cr, up by 8.5% YoY. The capex for the quarter stood at Rs 2,900 cr. Further, for FY20E, management maintained its capex guidance of Rs 15,000cr.

* In the last five years, PGCIL has been a consistent outperformer in the power sector with superior growth and healthy return ratios. Further, it has well maintained its leadership position in transmission business. In addition, PGCIL’s management expects healthy growth momentum to continue in both its consultancy and telecom businesses. We have a positive view on the company on account of its high quality earnings, leadership position in the transmission business and its past execution track record.

* Powergrid, after the initial surge post listing, had a prolong consolidation phase in broader range of 90-125, which lasted for nearly six years.

* It has been consolidating in a broader range for last two years while holding firmly above the support zone of long term moving averages on the weekly chart. It has retested the record high of late and taken a pause around the same. All indicators are in the favor of breakout in the near future. Traders are advised to accumulate fresh in the given range of 200-205 and maintain closing stop loss at 186 for the target of 230. 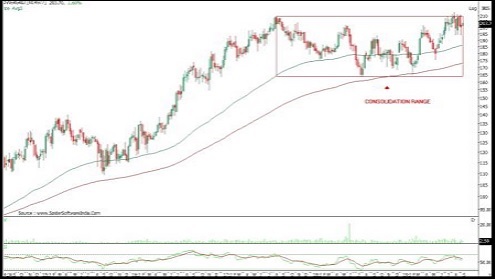 Is the smart meter programme under UDAY really smart?