If having more women directors boosts returns, why is India Inc. shying away?

Below is the Views On Monthly Outlook : Equity by Atul Kumar - Head Equity, Quantum AMC

Midcap and small cap indices had sharper fall. S&P BSE Midcap index and S&P BSE Smallcap index saw decline of 27.4% and 29.6% respectively in March. Such a significant fall has made many stocks look very attractive.

Healthcare, FMCG and IT were among the sectors which weathered the market crash much better. Healthcare index had a single digit fall. Consumers doing panic buying and over-stocking led to better volumes for non-discretionary items. Rupee depreciation helped IT stocks. Cyclical sectors such as banks, auto and real estate were hit most severely during the month. 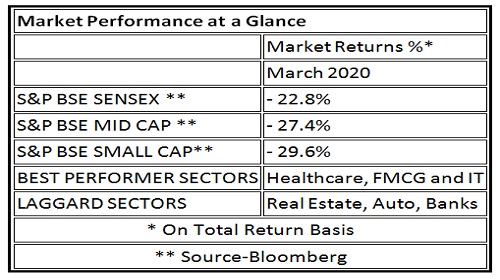 Past Performance may or may not be sustained in future.

FIIs rushed out of door as there was higher risk perception globally. Stocks worth USD 8.4 Bn were sold by FIIs. This is one of highest monthly selling in recent years. Domestic institutions were buyers to the tune of USD 7.5 Bn in March. In 3 months of 2020, FIIs have sold USD 6.2 Bn of India stocks while DIIs have bought equities worth USD 10.5 Bn. Rupee depreciated during the month sharply by 4.8% against US dollar.

Policymakers in India also responded to the crisis by several measures. A nationwide 21 day lockdown came in force starting 21st March. All economic activity barring essential services came to a halt. Transport services came to standstill, leaving people stranded wherever they were.

Government announced fiscal measures of Rs 1.7 Trn equivalent to 0.8% of GDP. Part of this money will go to the poor through bank accounts. The epidemic has moved from health problem to economic and societal and also turned into a humanitarian crisis. There are many sections of society and business which will find the going hard. Poor, small businesses, self employed have been hurt deeply. Some businesses such as hotels, airlines are at the frontline of the crisis.

A one month lockdown hurts the GDP by 8% (one twelfth of year). Given that the lockdown is total (as compared to some other countries where part of economy are functioning) impact will be very hard for India. Current stimulus announced is inadequate. More stimulus will be needed for India to withstand the unprecedented shock economy has witnessed. Many who migrate from rural areas to work in urban factories have gone back to their villages. They may not return soon, thus delaying the economic recovery even when health crisis passes by.

We remain very positive on equities at this point time. Investors should use this opportunity to deploy in equity if they don’t have enough exposure.Investors should continue with SIPs to take advantage of better valuations. Many companies will see fall in profits in fiscal 2021. This is more than made up by very sharp correction in stock prices, S&P BSE Sensex was down more than 30% at one point.

We believe the stocks we own have strong business and are led by competent management. They don’t have much leverage through debt. They will recover faster with resilient business model. Many have proven themselves through trying situations earlier.

India is likely to grow faster than many nations. Economy is dependent on domestic consumption and thus insulated from any global problems over the long term. While economic growth faces pressure in near term, better monsoon and measures to ease liquidity are likely to stimulate growth. While economic activity has halted in urban areas, things are much better in rural areas. Rural India will bounce back sooner after lockdown is lifted.

If having more women directors boosts returns, why is India Inc. shying away?

CBIC tells officials to do due diligence before issuing SCNs