* On the data side, domestic services PMI slumped to four months low.

* US dollar traded steady against a basket of currencies amid safe haven demand.

* In economic news, JOLTs job opening data for Feb is due in the later part of the day.

* Japan’s yen declined against USD on news of state of emergency declaration. 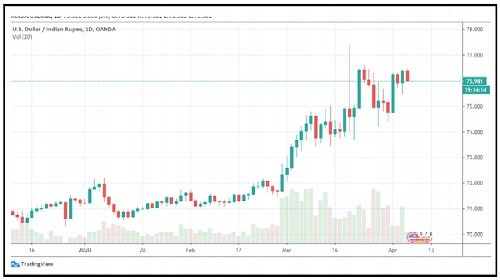 Pessimism surrounding the government’s borrowing plan in the troubled times of coronavirus, which fuel the concerns that it may not draw enough demand, dragged the currency that fell by 57 paise in the closing session. Weakness in the domestic equities also weighted in the currency markets. Local unit on the last day of the holiday shortened week opened at 76.05 a dollar and touched a low of 76.37 before ending the day at 76.19 against its previous close of 75.62. FIIs were sellers in the capital market segment; sold shares worth Rs 1960.97cr as per the exchange’s provisional figures on 03 Apr. DIIs, on the other end were buyers to the tune of Rs 226.55cr for the same period. India’s services PMI data after hitting a seven year high on February, slipped in March; contracted to 49.3 from 57.5 MoM. Oil prices once again came under pressure after a key meeting between Saudi Arabia and Russia scheduled for Monday was shifted to Thursday. In other news, Japan is set to declare a state of emergency on the back of sharp rise in coronavirus.

Teenagers who stay up late at greater asthma risk

No China origin, will invest and hire more in India: Zoom