*  In the current market scenario, we have seen stocks from the underperforming space witnessing sharp upsides in the last couple of weeks as the Nifty has moved towards its March high of 10200. We believe a round of profit booking can be expected in such stocks while stocks from technology may start witnessing fresh buying once again. Technology heavyweight Infosys has been hovering around Rs. 700 for a while. Now, it is likely to witness fresh upsides on the back of continued formation of long positions

* The open interest in Infosys has been gradually rising since the March series. From just over 30 million shares seen in mid-March, the current OI in the stock is closer to 48 million shares. Meanwhile, the stock has moved from Rs. 550 levels to Rs. 700 levels by the May series. After a round of consolidation, it seems it is moving higher once again. Considering long positions remaining intact, we believe a further up move is expected

* In the options space, the stock had the highest Call OI base at the 700 strike since the inception of the series. The ongoing consolidation around these levels has further strengthened the OI base. However, as the stock is trading above these levels, a continued up move may be seen towards next Call base of 800 strike

* The rupee has seen strengthening on the back of a weakening dollar and has moved to its major support level of Rs. 75. We believe major appreciation may not be seen in rupee, it may consolidate and eventually may start depreciating from here onwards. A weakening rupee should bode well for the technology space, especially Infosys 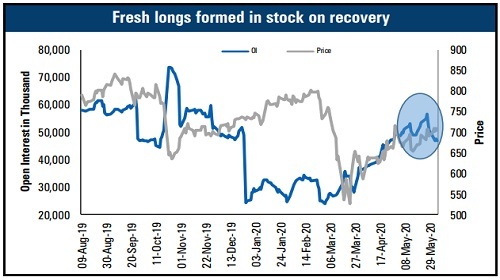