* Zigzag moves were witnessed in NCDEX Jeera August futures initially on Wednesday and ended on a firmer note, hitting its highest levels since April this year.

* The key jeera spot market of Unjha is shut for a week due to the spread of corona virus.

* Coriander August futures on NCDEX hit a fresh six month high on Wednesday on firm demand amidst dwindling supplies in the market.

* Turmeric NCDEX August futures traded firm on Wednesday and ended more than one per cent up on firm export demand.

* Cardamom August futures on MCX jumped nearly three per cent on Wednesday to its highest level in more than a month.

* The Tamil Nadu health authorities have decided to stop the e-auctions of cardamom being conducted at Bodinayakanur in Theni dist for 14-days after an official with the Spices Board of India was tested positive for Covid-19. According to the Spices Board circular The auctions scheduled from 20.07.2020 to 22.07.2020 vide Circular of even No. dated 26.6.2020 have been modified and shifted to E-auction Centre at Puttady Spices Park. The circular also adds that The E-auction schedule issued from 23.07.2020 to 24.08.2020 vide Circular dated 15.07.2020 stands cancelled and further directions on E-Auction schedule will be issued in Board’s website / intimated to the Auctioneers later. 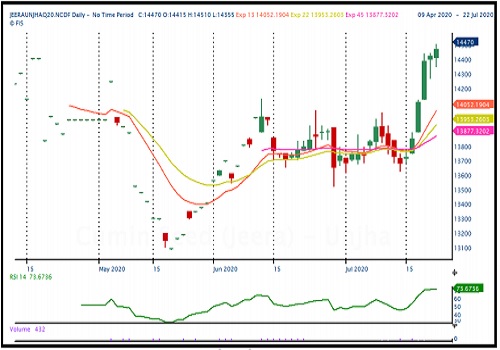 * NCDEX July Soybean extended its weakness due to higher imports of soy oil to India along with higher acreage. July Mustard seed prices traded higher due to lower arrivals in the spot market.

* India's edible oil imports rose 8.5% on year to around 1.2 mln tn in June, The Solvent Extractors' Association of India said in its report. For Nov-Jun, edible oil imports were at 8.1 mln tn, lower than 9.5 mln tn during the yearago period. Imports of refined, bleached and deodorised palmolein fell 99% on year to 3,000 tn in June, probably because it was kept under the restricted category by the Centre.

* Soybean acreage in the country nearly doubled on year to 10.1 mln ha as of last week, as per data compiled by farm ministry. The Union Cabinet approved a hike in minimum support price for 14 major kharif crops. MSP for soybean hiked by Rs.170 to 3880 from 3710 per 100 kg.

* According to Government 2nd advance estimate, castor production in 2019-20 is expected at 2.0 mln tn, up from the previous estimate of 1.7 mln tn. 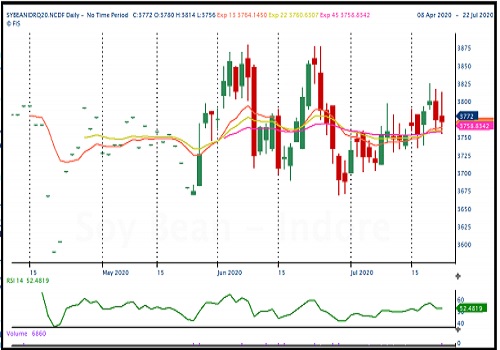 * The USDA has scaled down its 2020-21 (Aug-Jul) cotton export estimate for the US to 15.0 mln bales (1 US bale = 218 kg) from 16.0 mln bales projected in the previous month, the agency said in its world supply and demand estimates report for July.

* Farmers across India had sown cotton over 11.3 mln ha in the 2020-21 (Jul-Jun) season, up 17.3% from a year ago, as of last week. The acreage is higher than the normal of 9.6 mln ha for the period, based on the average for the last five years, according to farm ministry.

* The Cotton Corp of India has sold around 50,000 bales (1 bale = 170 kg) of the fibre from its procured stocks, said Pradeep Agarwal, chairman and managing director of the state-owned agency. Of the total quantity, most of the stock was sold in domestic market, while two deals have been signed with private mills in Bangladesh. 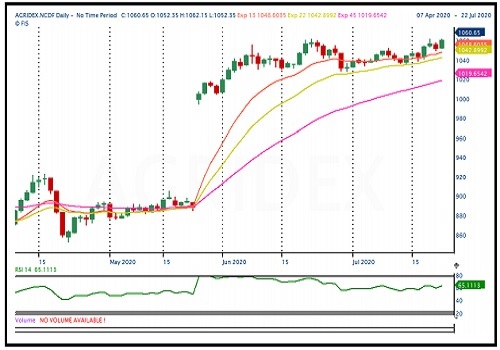 * Madhya Pradesh has procured 822916 tonnes of chana, masur and mustard harvested in 2019-20 at minimum support prices according to the government official.

* According to the data released by Rajasthan's Agriculture Department, as of July 9, guar has been sown under 404200 hectares, a 13.5 per cent rise compared to the same period last year.

* ICEX August futures shed more than 1.5 per cent on Wednesday, while in the spot market RSS4 grade rubber traded steady near Rs.132 a kg. 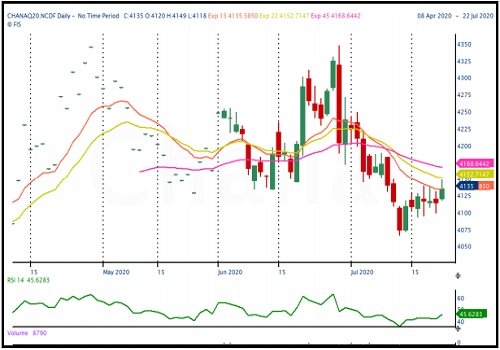 What Next: In Conversation with Mr. Rajesh Palviya, Head Technical Axis Securities with Nirav Hemani

Bank of India to raise Rs 8,000 cr, gets shareholders` nod

Silences of the abandoned