Mumbai, January 14, 2020:After staying in the pessimistic zone (below 50 mark) for two consecutive quarters, the 23rd Knight Frank–FICCI–NAREDCO Real Estate Sentiment Index Q4 2019 survey shows that the current sentiments of the real estate stakeholders in India have revived to the optimistic zone of 53 in the October-December quarter of 2019 (Q4 2019).  The report further indicates that the future sentiment score, that had gone in the red for the first time in the preceding quarter of Q3 2019, has also bounced back to 59 in Q4 2019. Though in the optimistic zone now, the qualitative outlook of stakeholders remains cautious, with a majority of them opining that the sector will remain at the same levels as previously even while it will not go down further in the next six months. A score of over 50 signifies ‘Optimism’ in sentiments, a score of 50 means the sentiment is ‘Same’ or ‘Neutral’, while a score of below 50 shows ‘Pessimism’.

“The real estate sector sentiments have shown improvement in its current as well as expected outlook for the market in Q4 2019. This optimism is significant in the wake of the continued downslide in India’s overall economic performance. Even while the sector is working towards finding its balance, especially in the residential segment, steps by the government have kept the sector stable in 2019. However, we expect the market to remain cautious and sensitive to even the smallest change as large-scale demand is yet to pick pace,” said

Shishir Baijal, Chairman and Managing Director of Knight Frank India. Shishir further said, “The sector’s optimism is far pronounced for the office sector, which has been growing strength to strength in the past few years, reaching historic highs in 2019. In the next 8 – 10 quarters, if the office, other commercial including retail, warehouse and logistics and the residential sector continue to show positive growth, despite the pace of growth of Indian economy, we can expect the real estate sector to show upward curve of revival. The sector, therefore, needs to start making adequate safeguards to ensure that the demand for all segments stays positive.”

Dr Niranjan Hiranandani - National president - NAREDCO and Founder & MD- Hiranandani Group, said, “It is from depths that a rise commences and for Indian RE 2019 was a year of potential growth which fell a tad short. Interestingly, the economic outlook for 2020 looks prospective with foreseen growth of Indian real estate turning to be a real game changer. The potential of its multiplier effect on boosting GDP growth in double digit inclusive of employment generation is in cognizant to achieve India's $5 trillion economy dream."  "The emergence of new segments like Logistics, Warehousing, Coworking and Co-living, Rental Housing and Data centres will take centre stage. Residential market shall witness revival sign with an anticipated uptick in demand and clocking sales log. REITs and InVITs shall continue to gain traction among the investors with an assured returns and steady capital flow," he added. 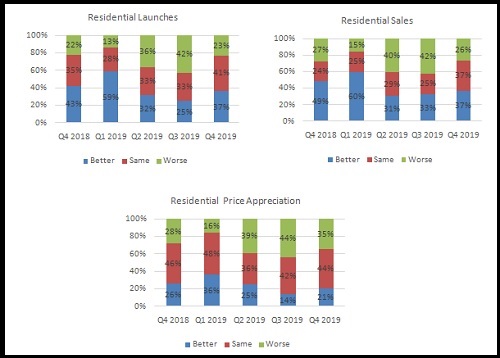 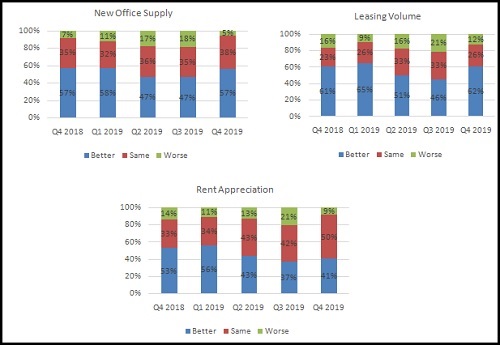 Sanjay Dutt, Managing Director & CEO, Tata Realty & Infrastructure Ltd., Chairman, FICCI Real Estate Committee, “The fortunes of the country’s real estate sector can be distinctively identified with two broad drivers - domestic and global consumption. The dynamics of these two explain the contrasting outcomes of its residential and commercial real estate market. While the commercial office segment has strengthened further and achieved the highest ever demand benchmarks at 60 mnsq ft across the top 8 cities in 2019, the residential overall market at 245,000 (3 quarters) housing unit seems to be improving in the affordable segment only. The rest of the segments and overall hang of inventory still remains 33-40 months. In case of the office market, with robust captive space demand from global corporations are in place. While the information technology sectors’ cost effectiveness metric for commercial properties is just right, it is also encouraging to see that the Non-IT Sector is over 50% of the total absorption. Tailwinds from global growth in demand for information technology applications across sectors will further improve this momentum and we see a sustainable office demand in the near future.

Sanjay further added, “On the other hand, the mainstream residential market needs greater support to commence a recovery anytime soon. It remains a mixed bag with some improvement seen in the affordable and mid residential segment on account of a large end user demand base, which is being rekindled with government incentives and very encouraging monetary policy interventions. An improving ecosystem that is focused on execution, oriented on cash flow and working in tandem with the RERA only points to a much stronger supply side for the times to come. Having said this, stakeholders should come to terms with the fact that it is going to be a long drawn affair and it would take at least 5 years for all interventions and course corrections that the industry has embarked upon to have a meaningful impact on the residential market.”

The budget definitely provides a holistic approach to the tourism sector By Mr. Pranav Maheshwari

Views On Pre-Budget 2020: Sectoral expectations from the budget by Mr. Jyoti Roy

Rural and infra related themes are likely to do well ahead of budget By Mr. Santosh Meena

Quote on Market Closing : It is a pre-budget rally where global tailwind is also supporting the current bull run by Santosh Meena

India`s real GDP could have shrunk by 5% YoY in July: Report

Miranda Lambert opens up on her scripted podcast