Farmers to get crops` price within 3 days: Government

Jain Irrigation`s investors are feeling the burden of high debt

The pile of debt sitting on Jain Irrigation Systems Ltd’s balance sheet is not a new problem. But sentiments that were already low slipped further after the company announced its March quarter results on 30 May. The stock has declined as much as 25% since then, and is now down about 72% from levels in January 2018.

The biggest disappointment was the increase in debt as another fiscal year ended. As on 31 March, consolidated net debt was around ₹4,700 crore or five times FY19 Ebitda (earnings before interest, tax, depreciation and amortization). 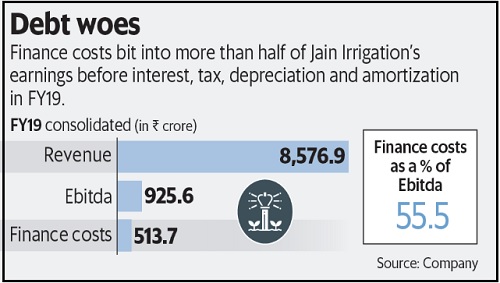 One of the reasons that debt hasn’t come down recently is high receivables, leading to a higher amount of working capital debt. Deutsche Bank analysts said in a report on 30 May, “We see Jain Irrigation as being caught in a debt trap as working capital and interest payments have been eating into operating cash flows, leaving negligible amounts for debt repayments."

Jain Irrigation said in a conference call after its March quarter results that while in the past it has tried to fix the debt issue by improving the working capital cycle, it was simultaneously completing its growth plan.

Accordingly, the management said the company invested in factories and acquisitions, which required access to capital.

Factoring in the miss in performance and higher debt, Edelweiss Securities Ltd has cut FY20 and FY21 earnings per share estimates by 16% and 12%, respectively.

Small wonder, Jain Irrigation shares have sharply underperformed the Nifty 500 index in the past 18 months.

The company intends to reduce debt by ₹2,000 crore over the next 12-24 months. “This would include a mix of corporate actions of demerger, divestment and equity infusion in our food and plastic business in India and overseas irrigation business," pointed out the latest investor communication from the company.

But since Jain Irrigation fell short of its goal of reducing debt in FY19, investors are not taking any chances.

Farmers to get crops` price within 3 days: Government