A mix of factors, such as the global auto slowdown, shift in accounting standards and initial costs associated with some of its overseas units, took a toll on Motherson Sumi Systems Ltd’s profits in the June quarter.

The global component maker’s consolidated net profit fell by 42% year-on-year to ₹361 crore. This includes its share of profits from joint ventures and associates. The steep drop was partly due to higher depreciation and interest costs attributed under the new Indian Accounting Standard 116. 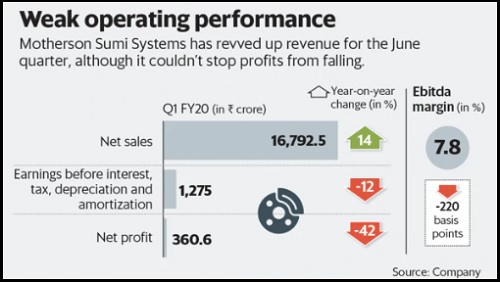 Even then, Motherson’s operating performance was weighed down by lower capacity utilization and higher costs. This was reflected in the 220 basis point year-on-year drop in consolidated Ebitda (earnings before interest, tax, depreciation and amortization) margin to 7.6%. Ebitda also fell by 14% year-on-year at ₹1,277 crore, though it was in line with Bloomberg’s 14-brokers’ average estimate.

Meanwhile, things were better at Motherson’s stand-alone entity. Ebitda margin rose marginally to 18.2%, in spite of a drop in revenue for the quarter. That said, according to company executives, the slowdown in domestic auto sales and uncertainty due to transition to BS-VI emission norms will weigh on revenue growth in the near term.

What punctured June quarter’s consolidated margin is the delay in ramp-up of operations in a couple of its overseas units. One of its key subsidiaries, Samvardhana Motherson Peguform (SMP) that makes interior and exterior modules and systems, is yet to rein in costs at two of its new units (Hungary and Alabama). SMP’s Ebitda margin fell from 6.3% to 2.6% year-on-year during the quarter under consideration, in spite of a 23% jump in revenue.

Meanwhile, the other two subsidiaries, Samvardhana Motherson Reflectec, which makes rear-view mirrors, and PKC Ltd, an EDS (engine data scan) supplier, staged a decent show, amid the travails of the auto slowdown.

That said, the risk of a slowdown in auto remains. The Motherson stock has tumbled 45% over a year, while the Nifty Midcap index has lost 17%. The current market price of ₹107.35 discounts estimated FY21 earnings by 18 times.

Although the valuation is not cheap and the sentiment for auto stocks is weak on the Street, Motherson’s scale of global operations and rising content (products supplied) per vehicle makes it poised to cash in on the auto turnaround, whenever it happens.

Global stocks and euro gain ahead of U.S. jobs data