The Direct Tax Vivad se Vishwas Act, 2020: What should you know?

Pay your property tax on time

Much ado about nothing: 65% of BSE stocks in the red since tax cut

In hindsight, the massive rally in Indian equities soon after the sharp cut in corporate tax rates was a case of much ado about nothing. In the two trading sessions after the tax cut, about three-fourths of all traded stocks on BSE rose. The market capitalization of the stocks listed on BSE rose 7.5% in these two trading sessions to ₹148.9 trillion.

But the markets have since given up nearly two-thirds of those gains, and the increase in total market capitalization since the tax cut now stands at only 2.7%. What’s more, nearly 65% of all traded stocks on BSE are now below where they were before the tax cut was announced.

“It’s been two weeks since the initial euphoria; and it’s clear that the markets are now pricing stocks almost as if the tax cuts didn’t happen. It’s back to fundamentals of companies and sectors," says the head of research at a multinational brokerage firm, who declined to be named. 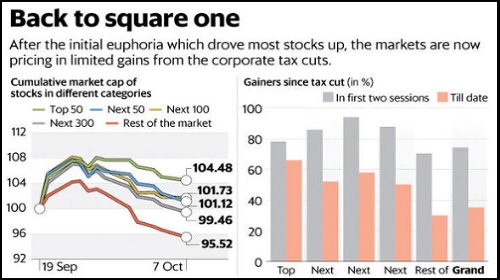 A case in point is the stark difference in the movement of shares of Reliance Industries Ltd (RIL) and Oil and Natural Gas Corp. Ltd (ONGC). While RIL shares have risen more than 11% since the tax cuts, those of ONGC have increased by only 1.7%. This is strange because the latter has a higher effective tax rate and is expected to gain more from the corporate tax cut.

“RIL shares have gained more because of the possibility of strong Q2 results," says the head of research mentioned above.

Also note that all else remaining the same, earnings of Indian companies were expected to rise 7-8% as a result of the tax cuts. The fact that cumulative market capitalization has risen by less than 3% shows that investors clearly don’t see the government’s move as a panacea.

Some of the near-term gains are expected to be offset by the continued softening in consumer demand, as well as the possibility of price discounts to pass benefits of the tax cuts to consumers. As far as the medium- to long-term impact of higher capital investments by Indian companies goes, it must be noted that this typically takes a long time to play out. For now, investors don’t seem to have ascribed any value on this count. Instead, they are perturbed by the continuing crisis in the banking and financial sector, and the weak data in recent surveys.

All that the corporate tax cuts seem to have done is improve investor sentiment for some stocks in the short term. In continuation of the trend seen since early 2018, most of the gains are restricted to a top few stocks. Leave out the top 2% of the stocks, and the market capitalization of the remaining vast majority is more or less at the same level compared to the pre-tax levels.

For the tiniest of the lot in terms of market cap, which constitute the vast majority of the stocks, there has been value erosion despite the largesse from the government.

The Direct Tax Vivad se Vishwas Act, 2020: What should you know?

Pay your property tax on time