Shares of Oil and Natural Gas Corp. Ltd (ONGC) have had a strong run in recent months. The stock has appreciated as much as 25% from its lows in mid-February. Of course, until February, it was on the decline, with investors worried that the state-run upstream oil producer would have to bear some subsidy burden for FY19. The recent increase in the stock is thanks to shrinking fears of subsidy sharing, say analysts. 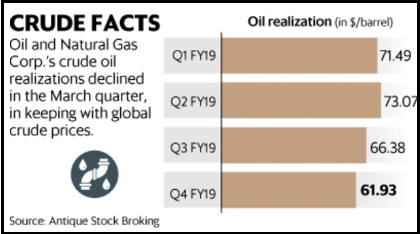 “The government has created a reasonable FY20 cooking fuel subsidy budgetary provision of ₹37,500 crore, which implies NIL burden on upstream PSUs as long as Brent averages under $65 a barrel," said analysts from SBICAP Securities Ltd in a report on 31 May.

Brent crude prices have recently flirted with the $60/ barrel mark, and fallen sharply in recent weeks. Note that at $68/barrel, ONGC’s net price realizations for FY19 were at a record high.

As far as the financial performance goes, the recently announced March quarter results were disappointing, with net profit missing Street estimates owing to some one-off provisions. Nonetheless, the company ended FY19 with a 38% year-on-year growth in its consolidated earnings per share to ₹23.81.

Indeed, this may sustain in FY20, helped by higher gas prices in the half-year ended September, wrote analysts from Jefferies India Pvt. Ltd in a report on 31 May.

There is room for upside if the ₹5,600 crore subsidy burden they have factored doesn’t materialize, added the analysts.

What has helped the cause of the ONGC stock is that its valuations are not demanding. Currently, the stock trades at around seven times estimated earnings for FY20, according to Bloomberg data.

Needless to say, investors would do well to follow the trend in oil prices. At the moment though, the outlook seems to be bearish, as global oil demand is not expected to be as robust.

Of course, with ONGC, oil prices cannot increase too much as well. That’s because subsidy sharing concerns again start to kick in. In any case, the stock is discounting a much lower net crude realization than the prevailing crude oil prices, pointed out SBICAP’s analysts.