Markets traded with the positive bias for the third successive session and gained nearly a percent. Initially, it opened lower, tracking weak global markets amid US-China tension however it soon trimmed the losses and inched gradually higher as the day progressed. Mostly sectoral indices participated in the move wherein realty, pharma and FMCG topped the gainers' list. The broader indices too witnessed decent traction and gained nearly a percent each.

Markets would react to domestic GDP data numbers on Monday i.e. June 1 which would be released on Friday i.e. 29th May. Further, the US President’s press conference on China amid Beijing-Washington tiff would also be on the radar.

We might see a pause after the recent surge but the bias would remain on the positive side, citing the potential of a further surge in the banking index. Traders should focus more on stock selection while maintaining a “buy on dips” approach. 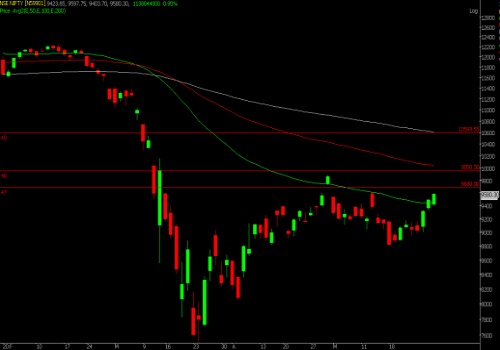 * We continue to remain constructive on CGCE’s growth prospects given its strong product portfolio, market leadership and increased focus on premiumization office portfolio. Further, its lean working capital cycle, strong cash flow generation and robust return ratios. Make it one of the preferred picks in the sector.