After three consecutive days of decline, the bulls staged a smart comeback as the Indian benchmark indices ended with strong gains of led by supportive global cues. The Nifty index ended with gains of 1.3% to close at 11,726. The broader markets underperformed the benchmark with BSE Midcap and Smallcap ending with gains of 0.4% each. On the sector front, barring auto which ended with losses of 0.3%, all the other sector indices ended with healthy gains. Notably, Oil & Gas, IT and Banking were the top gainers.

We expect markets would remain volatile in the near term given the earnings outcome and central election progress. On the global front, crude oil is trading at 2019 highs after US announcement of ending all Iran sanction waivers by May thereby putting pressure on importers. India is one of the key importers of Iranian oil and hence the developments on the sanction waiver would be closely monitored along with currency movement. We believe that any correction in quality large / mid cap companies with strong growth prospects should be considered as a good buying opportunity for long term investors. 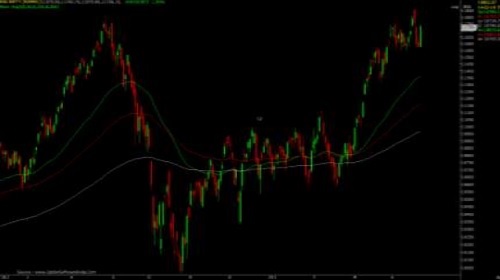 * Tata Elxsi’s Q4FY19 revenue de-grew by 0.5% QoQ to Rs 405cr. On the operational front, the company reported poor set of numbers wherein EBITDA de-grew by 4.7% QoQ to Rs 98.5cr while margins declined by 110bps QoQ to 24.3%. However, net profit showed growth of 8% QoQ on back of lower tax expense for the quarter.

HCLTECH is one of the strongest counter in IT pack, continuously maintaining the uptrend since 2009. Today, i.e. on 24 April, it has posted a fresh breakout from its 3-week long consolidation phase and also made a new record high. The move was supported with strong rise in volume indicating buying interest. Considering all, we advise initiating fresh longs as per the mentioned levels

KOTAKBANK has been consolidating in a narrow range for last one month, after the sharp surge from 1220 levels. It has recently witnessed a dip in line with profit taking across the board, offering fresh buying opportunity to those who missed the chance earlier. We advise accumulating in the given range.

added around 30% in open interest as long buildup was seen in it in previous session. Current chart pattern also indicates further up move in its price. We suggest buying GAIL as per below levels .