The Nifty index opened on a positive note and surpassed the 14750 mark for the first time. It consolidated at higher level for most part of the session, however, the indices corrected sharply after 2 pm and Nifty ended the day tad below 14600.

During most part of the day, the indices were trading on a positive note and the Nifty even marked a high over 14750. However, the weekly expiry session resulted in some serious profit booking in the later half and both Nifty as well as the Bank Nifty not only wiped out its morning gains, but ended the session in the red.

On the daily chart of Nifty, we can observe a negative divergence between price and the RSI oscillator as the price has surpassed the recent swing high and has made a ‘Higher High’, but the RSI has made a ‘Lower High’ in the same time frame. This divergence, and the profit booking that we saw in the broader markets in the later half yesterday indicates that although the trend is positive, one should look out to book profits on the long positions and avoid aggressive positions for time being.

The Banking index has consolidated within a range of 32860-31690 in last few sessions, and a breakout beyond this range could then lead to a directional move in this space which could drive the momentum in Nifty as well.

Also, the Midcap index is trading at a crucial juncture around the resistance as per Fibonacci ratios. Hence, until we see a follow up buying above this week’s high, some bouts of profit booking could be seen in this space too. Hence, we continue with our advice for traders to look for stock specific trading opportunities and also focus on timely exits on trading positions. As far as levels are concerned, the supports for Nifty are placed around 14500 and 14410 whereas resistance is seen in the range of 14700-14750 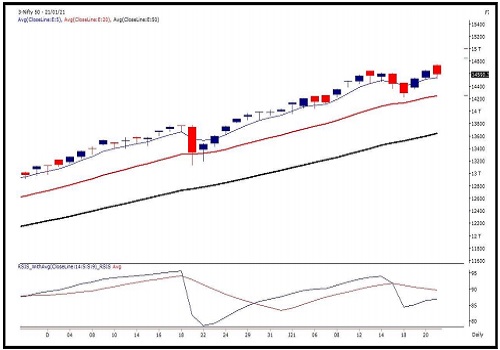 US markets were cheerful previous night so as yesterday morning (Dow Futures) after the oath taking ceremony of Joe Biden as 46th US President. This clearly had a rub off effect on our markets as well. BANKNIFTY started the session higher and then extended gains to clock fresh record high of 32842.30 at the midsession. However, all of a sudden the selling augmented in the market after 2 pm to not only pare down all gains but also to close well inside the negative territory.

BANKNIFTY was enjoying its northward move in the first half and everything looked hunky dory until the nosedive started in last one and half hours of trade. It is hard to gauge what triggered this sell off but probably it started after the disappointing set of numbers from Bandhan Bank. May be it’s just a broad based profit booking that coincided around the same time on the weekly expiry day.

Reason could be anything, but as mentioned in our previous commentary, 32700-33000 is to be seen as strong resistance and yesterday’s sell off exactly triggered after entering this zone. Since we can observe 3-points negative divergence in ‘RSI-Smoothened’ in all major indices, one should avoid aggressive longs. On the lower side, 32000 can be considered as key support, below which we may see some extended correction 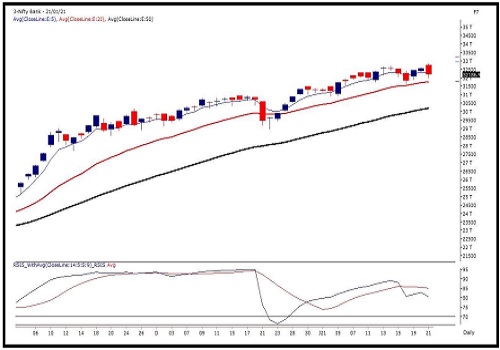