* Equity benchmarks witnessed profit booking as Sensex approached the psychological mark 50000. The Nifty entirely pared intraday gains and concluded weekly derivative expiry session on a subdued note at 14590, down 54 points or 0.4%. Market breadth turned in favour of declines with A/D ratio of 1:2. Sectorally, all major indices ended in red weighed by metal and pharma

* The Nifty opened the session with a positive gap and scaled to a fresh all time high (14754). However, profit booking from higher levels dragged index lower yet managed to hold Wednesday’s low (14518) and eventually recovered 110 points from day’s low. As a result, index formed a bear candle with shadows on either side, highlighting breather after a faster retracement amid elevated volatility (as index seen ~440 points movement during the session)

* Going ahead, we expect index to endure its northbound journey amid rising volatility ahead of key major event of Union Budget and eventually head towards our earmarked target of 14900 by the end of January. Thus, buy on declines would be the prudent strategy as possibility of minor profit booking at higher levels can not be ruled out which would offer incremental buying opportunity to ride next leg of up move towards 14900, as it is confluence of:

* The broader market indices have taken a breather by retracing less than 38% of past three weeks rally which has helped daily stochastic oscillator to cool off the overbought condition (currently placed around 60).

* Eventually we expect, broader market indices to relatively outperform the benchmark wherein small cap index would outshine. Key point to highlight is that the Nifty midcap index has surged to new life-time highs, whereas small cap index is still ~22% away from all time high. Thus, we expect small caps to witness catch up activity 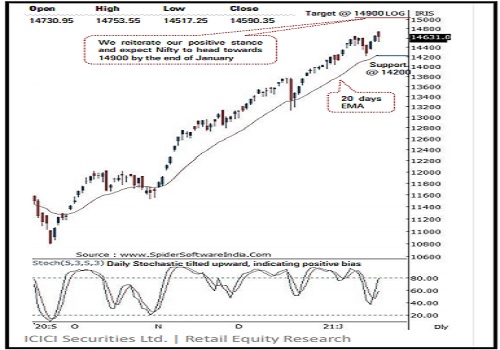 * The Bank Nifty traded with high volatility on account of the weekly expiry as it snapped its two sessions up move and closed lower by more than 1 % on Thursday . The profit was broad based as 10 out of the 12 index constituents closed in the red . Nifty bank index ended the session at 32186 , down by 356 points or 1 . 1 %

* Going forward, index holding above Monday’s panic low (31650) will keep the bias positive and will lead to extension of the current up move towards our earmarked target of 33000 levels in the coming weeks as it is the measuring implication of the recent range breakout (31000 -29000 ) .

* In line with our view, the current up move is in a zig -zag formation wherein intermittent episodes of profit booking at higher levels around the vicinity of our target of 33000 is being witnessed after a 13 % rally (28976 -32718 ) in just five weeks which has hauled weekly stochastic oscillator in overbought territory (currently placed at 92 ) . However, temporary breather should not be seen as negative, instead it should be capitalised as an incremental buying opportunity

* In the coming session, the index is likely to open on a flat note on the back of muted global cues . W e expect the index to trade in a range with high volatility while holding above Monday’s low (31650 ) . Hence use intraday dips towards 31950 -32010 in Bank Nifty January future for long position for target of 32230 , maintain a stoploss of 31840 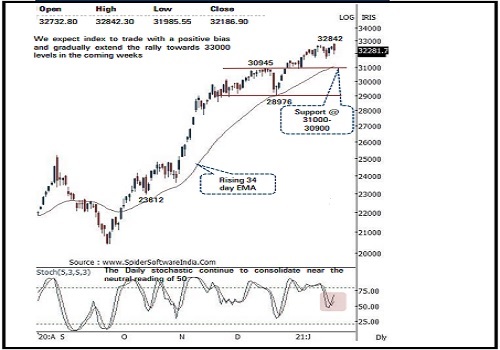