* Equity benchmarks extended gains over second consecutive session amid buoyant global cues. The index steered past its previous high of 14653 and recorded fresh all time high of 14666. The Nifty ended Wednesday’s session at 14645, up 124 points or 0.85%. Market breadth remained positive with A/D ratio of 1.1:1. Barring FMCG, all other indices ended in green led by Auto and IT

* The daily price action formed a bull candle carrying higher high-low, indicating continuation of ongoing up move as index witnessed follow through strength to last session’s swift up move. As a result, Nifty entirely retraced past four sessions corrective move (14653- 14222) in just two sessions. The faster pace of retracement signifies structural improvement that augurs well for next leg of up move

* Going ahead, we expect index to endure its northbound journey and eventually head towards 14900 by the end of January. Meanwhile, stock specific activity would continue as we proceed Q3FY21 earnings season. The sturdy move above the previous life-time high of 14653 backed by strong market breadth and broad based market participation has also confirmed a higher bottom in place at Monday’s low of 14200 and signals further acceleration of upward momentum towards our target of 14900, as it is confluence of:

* The broader market indices have regained momentum after retracing less than 38% of past three weeks rally which has helped daily stochastic oscillator to cool off the overbought condition (currently placed around 50). We expect, broader market indices to relatively outperform the benchmark wherein small cap index would outshine. Key point to highlight is that the Nifty midcap index has surged to new life-time highs, whereas small cap index is still ~22% away from all time high. Thus, we expect small caps to witness catch up activity

* The elevated buying demand highlights robust price structure that makes us confident to retain support base at 14200 as it is 38.2% retracement of current up move (13131-14666) at 14300 coincided with 20 EMA at 14167 and Monday panic low of 14222 In the coming session, volatility would remain high owing to weekly derivative expiry. However, we expect index to trade with a positive bias while maintaining higher-low formation. Hence, post positive opening, use dip towards 14640-14665 for creating long for target of 14744 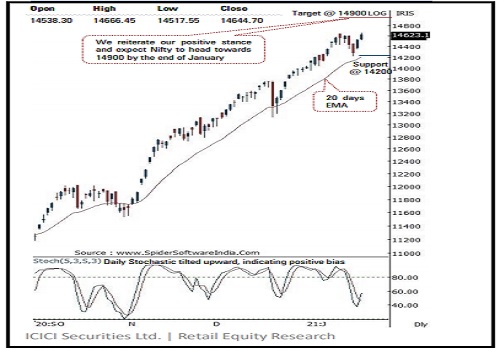 * The daily price action formed a small bull candle with a higher high -low signalling continuation of the up trend . The index opened on a firm note and traded in a range with positive bias to form an intraday high (32607 ) in the second half of trade

* Going forward, we expect the index to extend the current up move and head towards our earmarked target of 33000 levels in the coming weeks as it is the measuring implication of the recent range breakout (31000 -29000 ) .

* We believe subsequent up move from here on would be in zig - zag formation wherein intermittent episodes of profit booking at higher levels cannot be ruled out after a 13 % rally (28976 -32718 ) in just four weeks which has hauled weekly stochastic oscillator in overbought territory (currently placed at 92 ) . However, temporary breather should not be seen as negative, instead it should be capitalised as an incremental buying opportunity

* In the coming session, the index is likely to open on a positive note on the back of firm global cues . Volatility is likely to be high on account of the weekly expiry . However, we expect the index to maintain higher high -low and trade with positive bias . Hence after a positive opening use intraday dips towards 32520 -32580 in Bank Nifty January future for long position for target of 32780 , maintain a stoploss of 32410 Among the oscillators the daily stochastic has generated a buy signal thus supports the positive bias in the index 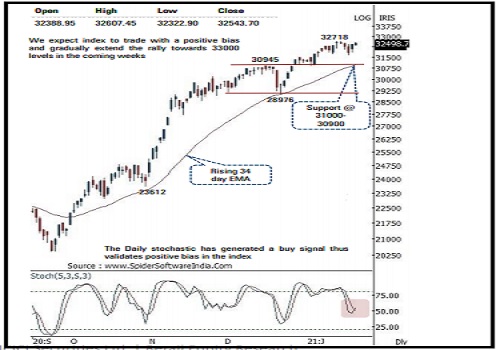