* Going ahead, we expect index to resolve higher and retest the August high of 11800 in coming weeks. Thus, any dip from hereon should be capitalised as an incremental buying opportunity. In the process, we expect broader market to endure its relative outperformance. Our constructive bias on the market is based on following key observations:

* b) On expected lines, broader market continued to outperform the benchmark. The faster pace of retracement in Nifty Midcap and small cap indices, supported by improvement in market breadth, as currently 72% constituents of Nifty mid cap and small cap indices have been sustaining above their 200 days SMA compared to past two weeks reading of 65%, signifying rejuvenating price structure that bodes well for durability of ongoing up move. Thus, any temporary breather from here on should not be construed as negative instead it should be capitalised on to accumulate quality midcap and small caps

* c) We believe the Nifty has undergone healthy retracement, as it took 15 sessions to retrace 61.8% of preceding 19 sessions up move (10882-11794), 11230. Slower pace of retracement signifies robust price structure that augurs well for next leg of up move

* The formation of higher peak and trough on the weekly chart signifies positive bias, which makes us confident to revise support base upward at 11300 as it is confluence of a)61.8% retracement of ongoing up move (11185-11618), placed at 11350 b)Positive gap recorded on September 10 is in the range of (11278-11327) In the coming session, we expect index to hold intraday support of 11450 and trade with a positive bias amid stock specific action. Hence, intraday dip towards 11455-11480 should be used to create long position for target of 11566 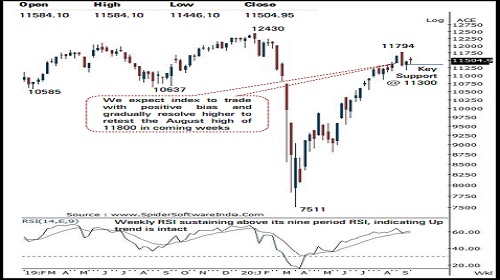 The Bank Nifty declined for the third consecutive week and closed lower by ~ 2 % during previous week on back of the soft global cues . The decline was broad based as both PSU and private banking stocks witness corrective decline . The Bank Nifty ended the week at 22031 , down by 449 points or 2 % on weekly basis

* The weekly price action formed a bear candle with a lower high and lower low signalling corrective bias as the index continue to consolidate near the support area of 22000 - 21800 . Goining ahead sustaining above previous week low (21785 ) will keep the pullback option open . Failure to do so will lead to extension of decline towards the 21000 levels being the identical lows of July and August 2020

* The Bank Nifty has key support around 22000 -21800 levels as it is the confluence of the previous breakout area and 80 % retracement of the last month major rally (21031 -25232 ) placed at 21900 levels as can be seen in the adjacent chart . We expect the index to hold above the same on a closing basis and witness a pullback

* In the coming session, index is opening on a flat to negative note on the back of muted global cues . Index continue to consolidate near the support area of 22000 . Hence use dips towards 21850 -21910 for creating long position for the target of 22130 with a stoploss of 21740 Among the oscillators the Weekly stochastic remain in downtrend, however approaching a trendline support joining previous lows . Hence supportive effort is expected at lower levels in the coming weeks 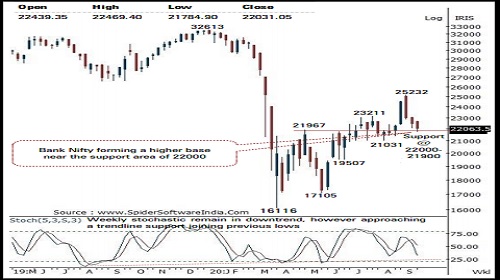