Nifty: Positive consolidation to continue above 11000 level​​​​​​​ By ICICI Direct

* The Nifty recovered from the crucial level of 10800 and is expected to consolidate more above 11000 in the coming week. Monetary policy outcome has happened and the markets are looking for fresh triggers. If global markets continue to trade with a positive bias, similar reactions would be seen in Indian markets also

* FIIs outflows have reduced. Fresh inflows are being seen from them, supporting the markets. The rupee appreciation trend is also going to be helpful

* Participation was seen from most sectors amid a lacklustre performance from the banking space. Metals, cement, IT, consumption and energy heavyweights have remained in a good trend. More such support is expected from these sectors

* The downsides in the banking space seem limited as this space has already remained subdued. We may see stock specific reversals from this space. We have seen some performance returning in select banking heavyweights

* We still believe the underperforming midcap stocks can start performing in this positive consolidation. Various sectors like capital goods, infrastructure and auto ancillary have a good number of stocks that have still enough room for participation. We can witness good short covering in these stocks 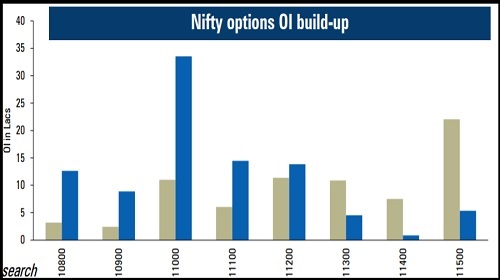 * For a couple of sessions, the Bank Nifty continued to trade in a range where a tussle was going on between OTM Call writers and Put writers as 21000 acted as support and 22000 acted as a hurdle

* During the week, major Call OI short formation level was at 22000. We feel a close above these levels would open the gates for higher target of 23000. However, thrice in the past few weeks, the Bank Nifty saw major support near 21000. We feel this would provide a cushion

* Post the RBI monetary policy out-come, most NBFC stocks saw short covering. We feel same kind of actions could be seen in private banks as well, which has consolidated for long now. Also, the rupee is hovering near 75 levels. We feel the rupee is likely to appreciate further. That will be an added boost for BFSI, which will push the index higher 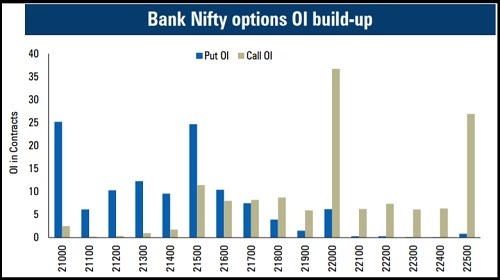