This week Indian bourses witnessed a tug of war between bulls and bears, with benchmark indexes mainly swaying sideways and investors remaining cautious. This prudence is not clearly evident, particularly in the benchmark index, which has become so polarized that just a handful of stocks are contributing in the surge. It is seen that the top ten stocks in Nifty200 beat the remaining 190 stocks by 7-8% this month. However, although the bigger companies are on an upward trend, the broader indices have seen a pullback. The percentage of stocks trading above their 50-day moving average has dropped from almost 100% in June to around 45% currently. The caution observed in secondary markets permeated primary markets, resulting in a series of tepid listings following a spectacular IPO season. However, a slump in small and midcap stocks at the beginning of August has resulted in some cleansing, which helped to keep markets buoyant.

The question that has been circulating in recent weeks is, "Are markets at the top of their cycle?" The fact is people have become weary and broader indices have reacted, indicating that this is not a top. Historically, peaks have formed around periods of high unbridled enthusiasm, but that excitement has waned in recent weeks. As a result, top would be a very strong term to use at this moment in time because the rally is far from done, however corrections on the way up cannot be ruled out. What we observed was not the ‘beginning of a crash,' rather a ‘healthy correction inside a larger bull market.' Investors should accumulate quality businesses on dips. With market creating new highs every week, this definitely does not seem to be the last of greens that we expect to see.

Event of the week

The FM announced a huge Rs. 6 lakh crore National Monetization Pipeline to unlock value in brownfield projects for infrastructure creation across the country. While this plan is beneficial to the overall economy and appears promising on paper, it could be riddled with speed breakers such as lack of revenue streams from specific assets, regulatory and taxation concerns, and unimpressive bids for PPP ventures, which indicate reluctance among private investors. Thus, the actual impact of this strategy will be evident only once some substantive measures toward execution are taken, which will need extensive preparation on the ground as well as administrative readiness. Investors should not jump into the bandwagon immediately.

Nifty50 closed on a positive note for the week but continued to trade within the previous week’s candle range. On the daily time frame, it has been making a series of spinning top and hanging man candlestick patterns which are signs of indecisiveness. A mild dip towards short-term averages can be expected but the major bullish trend will be intact as long as Nifty trades above 16250 levels. Any break below 16360 support levels will signal weakness in the short term 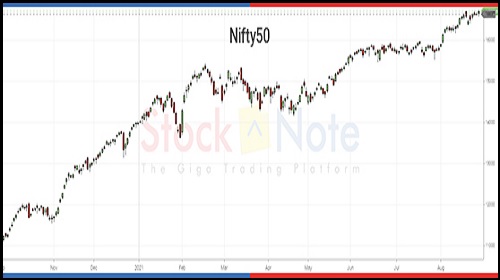 Expectations for the week

Indian bourses are expected to face whipsaws post Fed’s Jackson Hole meeting outcome. Participants are eager to understand the timelines for gradual tapering of bond purchases to judge the mood on the Street. Markets could also be impacted by an eventful economic calendar which begins with quarterly GDP growth rate numbers, followed by auto sales numbers and manufacturing PMI data. Profit booking may occur in certain overpriced stocks, however investing in high quality companies in stages would be a smart strategy. Nifty50 ended the week at 16,705.20, up 1.55%.

Sensex@60000 is a possibility today By Vijayakumar, Geojit Financial Services