Biden logs the best stock-market rally from Election to Inauguration Day in history. In the 11 weeks between the Nov. 3 election and Wednesday’s close, the S&P 500 surged a dazzling 14.3%. US Stock indexes climbed on Inauguration Day before and after President Joe Biden was sworn into office. Technology stocks drove the rise after well-received results from Netflix, building on Tuesday’s gains for the sector.

All three major benchmark U.S. stock indexes closed at record highs Wednesday after Joe Biden was sworn in as the 46th U.S. president.

Earlier in the session, a parade of encouraging corporate earnings reports also helped stoke optimism about the path to economic recovery. Shares in Asia-Pacific rose in Thursday morning trade after stocks on Wall Street sailed to record highs as U.S. President Joe Biden was sworn into office.

Nifty made a new intra day high reflecting the underlying strength in the indices. Its close was the highest ever. Volumes after rising post Jan 04, have come back to normal. Advance decline ratio has improved to much above 1:1. Institutional buying (esp FPI) has gradually slowed however neither the institutions nor the non-institutional participants seem to be in a hurry to take profits even as the Union Budget looms ahead.

Ahead of the upcoming Union Budget, the Federation of Automobile Dealers Associations (FADA) on Wednesday urged Finance Minister Nirmala Sitharaman to introduce benefits of claiming depreciation on vehicles for income tax-paying individuals and extend the the depreciation period for corporates. In its budget recommendations, FADA also said auto dealers should be kept out of annual TCS (tax collected at source) of 0.1 per cent saying it is a huge financial burden on the automobile retail industry.

Maruti Suzuki India commenced export of Suzuki’s compact offroader Jimny. The three-door Suzuki Jimny will be exported to Latin America, Middle East, and African markets from India. The first shipment of 184 units left from Mundra port for Latin American countries such as Columbia and Peru.

Competition Commission of India (CCI) has approved the acquisition of the stake in Max Life Insurance by Axis Bank, Axis Capital and Axis Securities.

Observation: Nifty continued with sustainable upmove for the second consecutive session on Wednesday and closed the day higher by 123 points. Nifty opened on a positive note, shifted into a further upside in the early part of the session before shifting into an intra-day range move.

Minor dips of mid part has turned out to be a buy on dips opportunity and Nifty registered a new all time high at 14666 towards the end. Another long bull candle was formed, which indicate an uptrend continuation pattern. The previous four sessions decline has been retraced completely in the last two session. This faster retracement could signal further upside in the short term.

The positive sequence like higher highs and lows continued on the daily chart and Nifty is currently making an attempt to reach higher highs. Previously, the short term downward corrections have resulted in a sustainable upside for many sessions. Hence, having moved up sharply from the higher bottom in the last two sessions, Nifty is expected to show further upside gradually.

The immediate support of 10 day EMA has proved to be a false downside breakout and that led to a sharp upside reversal. As per this pattern, this 10 period EMA could be tested again during next dip, after moving into new highs above 14666-14700 levels. On the upper side, the long term trend line resistances (top-top and bottom-bottom, as per monthly chart) could come into play.

Conclusion: The short term trend of Nifty continues to be positive and Wednesday's upmove could be a confirmation of bullish reversal from the lows. One may expect further upside for the next few sessions, before encountering a next crucial overhead resistances around 14800 levels. Immediate support is at 14550. 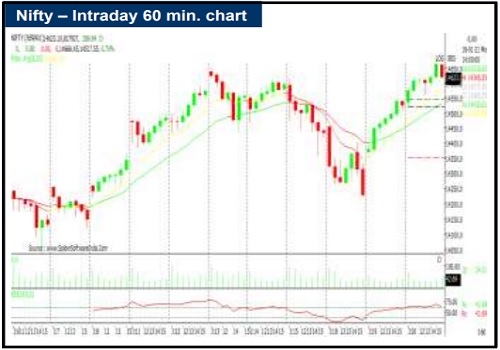