Update The U.S.10-year note yield fell 1.2 basis points to 0.670%, trimming the benchmark maturity’s weekly rise to 3.4 basis points, while the 30-year bond yield was unchanged at 1.431%, leaving its weekly rise of 5.9 basis points intact. Both long-dated maturities marked their biggest weekly increase in a month. The two-year yield edged 0.9 basis point lower to 0.155%, contributing to a 1.2 basis point drop for the week. Treasury yields retreated from their session highs, amid haven buying driven by concerns that recent U.S. labor-market gains seen in June’s job report could be undermined if the nation fails to bring the coronavirus under control. The U.S. Labor Department reported the U.S. economy had added 4.8 million jobs last month, above the forecast of 3.9 million. The unemployment rate fell to 11.1%, dropping for a second month in a row. Analysts cautioned that the labor market could struggle to recover swiftly if the spreading COVID-19 pandemic slows down consumer spending as Americans stay indoors, not necessarily due to lockdown measures but out of fear of catching the disease.

The Reserve Bank of India stepped in through Operation Twists and likely to continue with such operations in the near term as the support required to keep the yield under check and secondly to support the government's huge borrowing plan. A more decisive roadmap of OMO is required to keep the rates low. Foreign investors bought a net 14.2 billion rupees worth of bonds on June 29, the highest single session buying since April 20, reflecting some return in appetite for domestic debt. Foreign Banks coming back to the street will provide support and the yield may fall further. Inflows of Rs 42,000 crore into debt mutual fund schemes in June and Rs 6.50 lakh crores liquidity surplus contributed to the sharp drop in yields. This bond rally is being witnessed across the corporate bond yield curve. Investors are chasing higher yields in the AAA-rated PSU space, as supply of papers has come down and demand has increased. PSU Bonds and government bond spread has shrinked to 40 from 60 bps across the maturities. RBI needs to do LTRO at the long end of the yield curve to anchor the long-term rates in the economy. This will sustain the yields at the long end of the yield curve and not lead to undue spike in volatility due to excess government borrowings. Many countries in the world are targeting the long end of the yield curve to boost economy activity. This will give confidence to entrepreneurs and consumers and make commercial decisions, as they are assured benchmark interest rates will be low for long period of time. This will also help in regaining the economic growth which is being affected with the ongoing pandemic.

Yield Outlook for the week 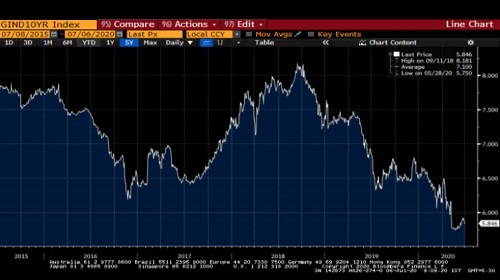