Mumbai: Having declined in both numbers and valuations this year, initial public offerings may shrink to a trickle in the second half, hit by continuing volatility in the markets on account of domestic and global issues, investment bankers said.

After a lacklustre first half, three IPOs hit the markets in the last fortnight—those of Affle Ltd, Spandana Sphoorty Financial Ltd and Sterling and Wilson Solar Ltd. But while Affle’s IPO was heavily subscribed, the other two deals barely managed to cross the finish line.

The number of IPOs more than halved in the first six months of 2019 to eight from 18 in the first half of 2018— touching its lowest in the last three years.

“The current market conditions are quite challenging and it is difficult to see a significant recovery in the IPO markets in this calendar year," said Mukund Ranganathan, executive director at Motilal Oswal Investment Banking. 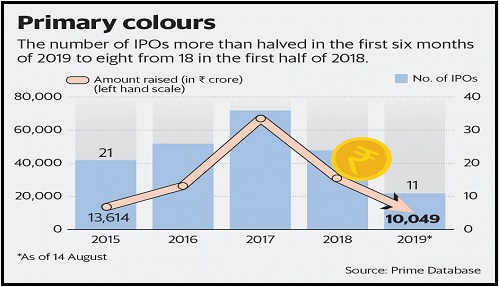 “In a good market we have seen over 30 good quality IPOs in a year. The rest of this year will see more DRHPs (draft red herring prospectus) expiring rather than companies actually being able to bring out their IPOs."

This slowdown comes at a time when several companies are holding market regulator Securities and Exchange Board of India (Sebi)’s approvals. A company has to get listed within a year of getting a go-ahead from Sebi, or re-file the draft offer document and seek fresh approval.

“There are about 50 DRHPs filed with Sebi. Sebi approvals for some of them are likely to expire in the next couple of months. Given the volatility in markets, some of the IPO-bound companies may look at alternatives such as private equity funds," said Nipun Goel, head of investment banking at IIFL.

According to Sandip Bhagat, founding partner of law firm S&R Associates, even firms whose Sebi approvals expire between September-end and December may not be keen to float an IPO this year.

“The trend is that even though some companies that filed their offer documents last year and their approvals have still not expired, they do not want to go for an IPO because the markets still seem soft," said Bhagat.

“There may be certain types of companies, such as small finance banks, which will have to go for an IPO due to Reserve Bank of India’s regulatory requirements, unless they get some relief from the central bank," he added.

“I do not think the IPO market is muted; it is the valuation expectations that are getting rationalized. And, good companies with strong management teams, where the promoters are willing to reset their company’s valuations, will find investor interest and will be able to raise capital even amid volatility," he said.