Below is the Views On Monthly Views by Mr. Atul Kumar, Head-Equity Quantum Mutual Fund

Among sectors, IT, healthcare and metals were those with highest gains for July. IT companies demonstrated margin resilience and some gave a positive revenue growth guidance for current fiscal year in their quarterly results. Real estate, power and capital goods had bad performance during the month. 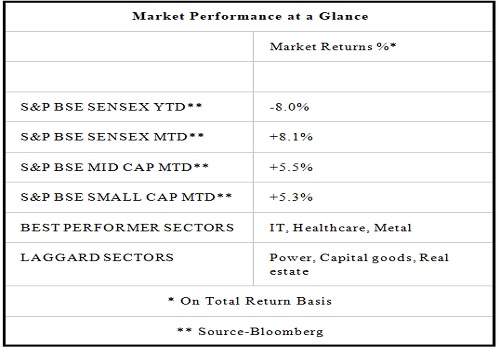 Past Performance may or may not be sustained in future.

FIIs lured by zero interest rates and abundant liquidity pumped USD 1.1 Bn in India equities. So far in 7 months of 2020, they have been sellers of USD 1.3 Bn. Domestic institutions (DIIs) were net sellers of USD 1.3 Bn during the month. Mutual funds contributed USD 1 bn to selling, balance coming from insurers. So far in 2020, DIIs have been net purchasers of equity to the tune of USD 10.5 Bn. With US dollar depreciating against all currencies, Indian rupee gained 0.9% against it.

The month saw EU leaders reaching a fiscal stimulus package after days of intense wrangling. The package of EUR 750 Bn (USD 857 Bn) would specially help EU countries such as Italy and Spain which are worst affected by virus. There have been negotiations in US as well for a stimulus package USD 1 Trillion. This comes on top of USD 2 Trn which was announced earlier and is in the process of being spent

Balance sheets of central banks have been expanding at a rapid pace since Covid-19 broke out and severely damaged economies around the world. Heavy dose of monetary policies are leading to financial markets performing very well. Balance sheet of ECB has expanded from 4.7 Trn to 6.4 Trn euros since Mar’20. 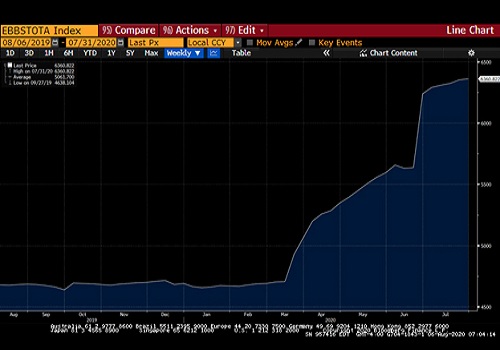 Economic activity levels globally are hugely challenged. Most countries with exception of China are seeing 9-15% contraction in recently announced GDP. Unemployment levels remain high and employers continue to cut jobs in most stressed sectors. Small and medium businesses are facing the brunt most.

In India economic recovery continues at a gradual pace. Country saw very strict restriction on movement of people and goods starting March and continuing till May. June data saw a smart pick-up in activity. Trends in July were weaker however. Refinery utilisation of biggest oil refiner in India dropped from 90% in June to 75% in July. Activity decline can be partly attributed to localised lockdowns in parts of South and East part of country. There is also be attributed to pent-up demand in June that was satiated later.

As pointed in last month report, there has been a huge surge in retail investors who are trading in stocks. This phenomenon has been common across the globe. Many of these new investors are product of lockdown, with nothing much to do. Retail traders contributed INR 3.5 Bn in revenues of company as compared to 2.1 Bn in same period last year.

Monsoon turned out to be erratic in the month of July with 9% deficiency. It had a decent start in the month of June and is critical for the rural sector. India also had trade surplus after 18 years in June month. Exports picked up while imports were remained subdued.

India is likely to grow faster than many nations. Economy is dependent on domestic consumption and thus insulated from any global problems over the long term. While economic growth faces pressure in near term, better rural economy and measures to ease liquidity are likely to stimulate growth. Opening up of most parts of economy is likely to lead to demand revival and employment creation. The risk being corona virus doesn’t see a resurgence.

BSE Sensex has risen from PE of 16 times in March month to 27 times currently. While economic recovery is far away, market valuations have come back to pre Covid-19 impact levels (chart below). This has made it look slightly expensive. However, it is only a handful of stocks which have contributed to the overall rally. Earnings of most companies are likely to be disappointing in FY21 as lockdown has affected most.

PE chart of Sensex (past 1 year)

Past performance may or may not sustained in future.

QLTEVF saw a 7.4% appreciation in NAV in the month of July. This compares to 7.2% rise by its benchmark S&P BSE 200 TRI. Some of IT scrips in the portfolio of QLTEVF had good gains contributing to performance. A few PSU stocks were drag on overall performance for the month.

Cash in the scheme stood at approx. 7% in July. Position in a healthcare stock was trimmed during the month owing to higher valuations and stock giving superlative returns. Scheme is also selling its position in a power utility stock as view of business has changed.

Amid `ease of business` claims, going remains tough for MNCs