In the world of high finance, the term ‘Greenspan PUT’ has deep significance.The term arises by combining Alan Greenspan, the longest serving US Federal Reserve Chairman; and a Put Option.

A buyer of a Put option is protected if the market price of the asset declines below the put price.The holder can exercise the put option and sell the assets at the put (strike) price even if the actual asset prices are lower than that level.

The Greenspan PUT is a market expectation. It is an expectation that if the stock markets witness a sharp decline, the US Federal Reserve (US FED) would take actions to prop it up.

This has been true right from the 1987 LTCM crisis to the current COVID-19 event. At everyfinancial or economic crisis, the US Federal Reserve eases its monetary policy to support growth and thus support the equity and bond markets. 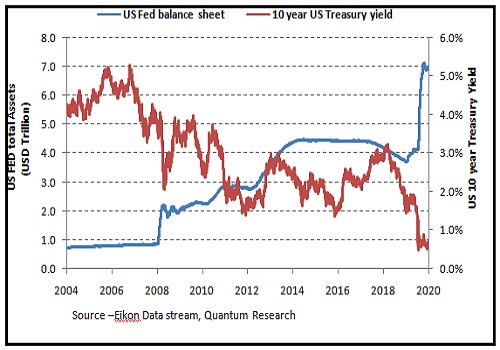 It will do either or all of the following - cut interest rates; keep them low for long; flush the market with liquidity by buying US treasuries (Quantitative Easing-QE). Low interest rates and easy liquidity supports risk taking. It has been general impression in US market that If you are investing in Equities or debt, you know your maximum loss is until the time the FED steps in.

This expectation of the US FED is so entrenched that it does not matter who heads it. You may as well call it the Bernanke PUT, the Yellen PUT, the Powell PUT.The market expects every FED Chairman to behave the same way. When there is a crisis, the FED will bail us out.

Is there a Das PUT?

Are we seeing something similar in the Indian Bond Markets?

The RBI Governor Shaktikanta Das has already evoked the European Central Bank (ECB) Chairman Mario Draghi by using his term ‘whatever it takes’.Draghi used that term in 2012 to show the ECB’s resolve to keep the European Union together. Das used it last year to show the RBI’s commitment to supporting growth.

Does the bond market now expect him to follow the US FED and provide the Das PUT?

In our Julyedition of the Debt Market Observer, we compared the bond market rally since COVID to being on a roller coaster and we cautioned investors tofasten their seat belts, as the roller coaster was likely to make its hoops and turns.

We had written this while discussing our outlook on bond yields:

“Till now, the RBI has been silent on monetization of government debt (RBI directly buying large amounts of government bonds) and preferred a more tactical approach in intervening in the bond markets. In the recent past they conducted Open Market Operations (OMOs) only when bond yields had moved above a certain threshold providing a “Put option” to the market”

The Das PUT was tested. 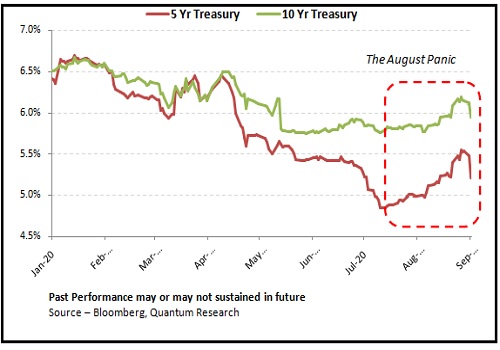 Bond market participants were panicking. There was no RBI support even when 10 year bond yields rose above the psychological level of 6%. The government bond auction of August 21stsaw the RBI declaring a cut-off where the yields were much higher than prevailing market levels. The markets took this as a sign that the RBI will accept higher yields.  Bond yields sold off even more (yields rose, prices fell) as the panic set in.

The RBI stepped in. They first indicated their displeasure by not selling bonds at higher yield to market participants but instead ‘devolved’ it on primary dealers. They then announced ‘Operation Twist - OT’ – where the RBI will sell short dated securities and buy longer tenor bonds.

Before the end of the month, with 10 year bond yields still above 6%, the RBI became even more aggressive in its response. It double the amount of Operation Twist to total INR 400 billion spread over four weeks. It also increased the HTM limit (Hold to Maturity) for banks to allow them to hold higher quantity of centre and state government bonds without having mark to market on those.

HTM (Hold to Maturity) limit for banks has been raised from 19.5% to 22.0% of NDTL (Net Demand and Time Liabilities). This increase can boost banks’ demand for government bonds by about INR 3.5 trillion.

The impact was immediate. On September 1st, bond yields fell by 20 bps across the curve, with the 10 year bond trading well below the 6% level. This has convinced the bond markets for now that the RBI will not tolerate any large increase in bond yields.

This is the Das PUT. Buy government bonds, support the government fiscal deficit and do not worry about interest rates rising as the RBI will ensure they won’t let it rise by much.

The moment the 10 year bond yield crossed the 6% level we started buying longer tenor bonds in our Quantum Dynamic Bond Fund. Since we were holding a higher than usual cash position and low maturity profile, we added and increased the portfolio duration (a measure of interest rate risk) as yields rose.

To put it in context, as at end July, the portfolio maturity of the Quantum Dynamic Bond Fund (QDBF) was 1.7 years. By the end of August, it increased to 8.1 years. We deployed our cash and switched some of our short maturity positions to the 10-15 year segment.

Why did we increase the portfolio risk?

We are trying to take advantage of Das PUT.

The RBI has done everything and more over the last one year to get interest rates low and spur growth. It has pledged to the market that it will do ‘whatever it takes’. Of course, the pledge is not solemn, they can go back on it.

India is the nation worst affected by impact of COVID-19.  A falling economy, with a troubled financial system and stretched government balance sheet requires continued support from the central bank to maintain financial stability.

Why interest rates do not remain low for long in India?

Indian bond yields are at historic lows. Indian interest rates are nearall-time lows. If you look at the 20 year chart of the Indian 10 year bond yield, the levels below 6% do not sustain for too long. The average during this period is 7.57%. This chart is also volatile and broadly ranges between 5% and 9%. 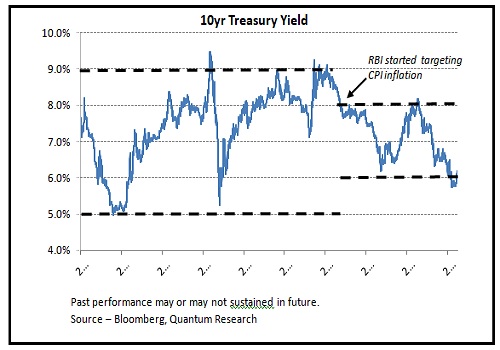 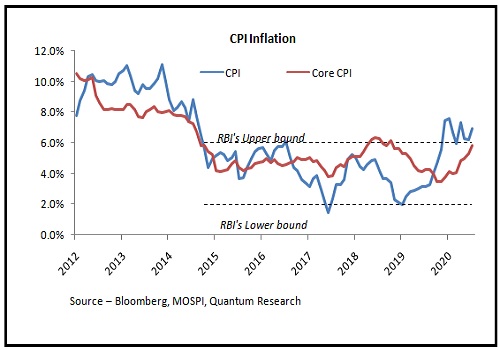 Over the last year, the RBI has turned its focus to growth and as the chart shows it has kept the Repo Rate well below CPI inflation. Bond yields have thus broken below the 6% level.

In 2004 and 2009 look at the rise in yields once the bond yields touched all-time lows of about 5% yield. The yield rise in both cases was all the way up to 9% over a 4 year period. Such large up move in yields were negative for the bond returns on both the occasions.

Bond Returns came down in periods after low rates

2004-2008: the yield rise was primarily driven by higher growth and followed by a very late cycle inflation.

Overall a good outcome, as an asset allocation shift to equities would have managed the lower returns from fixed income

2009-2013: the initial rise in yields was purely an outcome of the increase in fiscal deficit. The centre’s fiscal deficit exploded from 3% of GDP to 6%; while at the same time RBI had to catch up to the very high CPI inflation by aggressive rate hikes.

A bad outcome as fixed income returns fell, equities didn’t do well and we eventually ended up with a currency crisis.

Fiscal Deficit shoot up after 2008 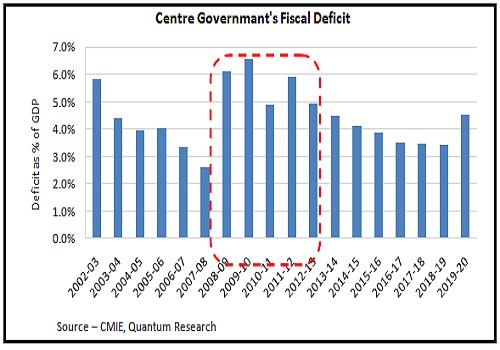 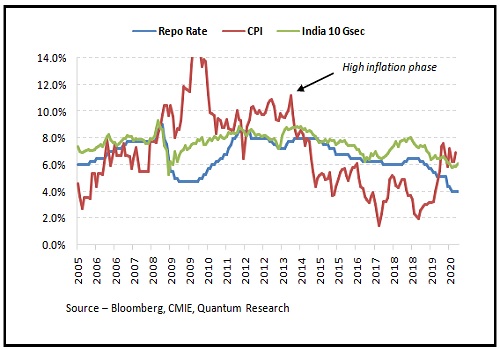 In the current scenario, we have a large increase in fiscal deficit as the government responds to the economic impact of COVID-19. The trouble is that the fiscal deficit is likely to stay high in FY 2022 as well.

This year, the lack of growth and the risk aversion, has meant that banks have excess cash to buy government bonds. The bond market will face high supply of bonds next year at a time when the liquidity and credit conditions might not be as supportive. This could lead to higher longer tenor bond yields going ahead.

The RBI cannot ignore inflation as well. They did a similar mistake in 2009 in tolerating very high inflation to allow the economy time to recover from the global financial crisis of 2008 (see chart - VI). Inflation does not seem a major worry as of now as demand conditions remain weak. The supply constraints which have led to rise in food prices should also ease on higher production due to good monsoons.

The government has increased import duties on a variety of products as part of ‘Make In India’ and now the ‘AtmaNirbhar’ policy. We worry that initially this may lead to a situation of higher domestic inflation as imported goods become expensive.

The increase in our portfolio risk and maturity is thus a tactical move. We are playing the Das PUT and the resultant stealth softening of bond yields. Given the objective of our fund stated in the name itself – we retain our right to remain dynamic in our portfolio construction as we though remain cognizant of these risks on the horizon.

We understand the economy and markets are currently adjusting to an unprecedented shock. There are too many moving parts and things are still evolving. Thus any forecast about future is susceptible to change based on policy responses from the government and the RBI and the changes in global markets. We stand vigilant to review our outlook as and when new information comes. Nevertheless, it would be prudent for investors to be conservative at times of heightened uncertainty.

We suggest that investors shouldstick to debt funds with lower maturity and good credit quality. While investing in debt funds, investors should keep the market risks in mind. Investors with low risk appetite should stick to Liquid Funds to avoid any sharp volatility in their portfolio value.

Given the excess liquidity situation, which we expect to continue, returns from overnight and liquid funds will remain muted. However in the current uncertain times, investors should live with lower returns and should prioritize safety and liquidity over returns.