Midcaps on sale but investors need to look beyond valuation discount

The hope rally since the 2014 general election gave more than hope to midcap stocks. In anticipation of an improvement in India’s political and economic scenario, midcaps became must-haves, under the assumption that the rate of improvement will be much higher in relatively smaller-sized companies. As a result, many midcap stocks started trading at highly unusual valuations. 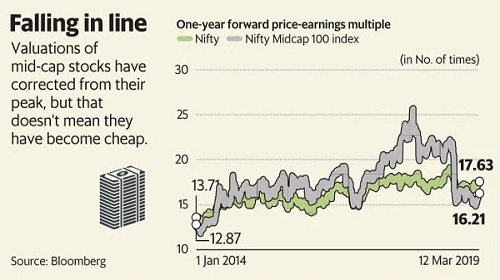 In the past year, there has been a reality check and valuations are now at a discount to large-cap stocks. In mid-February, the discount rose to 12%. This is the highest in more than five years and a far cry from the valuation premium of more than 30% in early 2018.

As a result, midcaps are in vogue again. Since mid-February, there has been a flurry of purchases of shares of mid-sized companies, which has caused the discount to narrow to about 8% now.

However, while some brokerage firms have turned positive on midcaps citing correction in valuations, on an absolute basis, valuations still have room for correction.

The current jump in risk assets (mid- and small-caps) is again a case of hope rally, like the one between 2014 and 2018, which could fizzle out if earnings continue to get downgraded, he said.

Increased foreign participation in the market could be aiding sentiment as well.

“Midcaps see traction usually when there is liquidity in the market and people are looking for investment ideas. We are seeing that foreign institutional investors and high net-worth individuals are returning to Indian equities. That said, one should not paint the entire midcap universe with the same brush and should be selective here," said Pramod Gupta, partner at financial services firm Arjava Partners.

The improving narrative around the outcome of the general elections could also be aiding momentum in midcap stocks.

“Until October 2018, most polls suggested a BJP+ win. Since then, they are pointing to a hung Parliament. However, these trends could change again in polls conducted after the recent flare-up of India-Pakistan tensions," HSBC India Ltd said in a report on 6 March.

However, investors should note that general elections are only a near-term trigger for the stock market, according to historic data. Eventually, fundamentals such as earnings growth and revival in private sector capital expenditure determine the long-term performance of stocks.

It’s best to be selective rather than get unduly excited about the midcap rally. Else, confusing a discount for an attractive buying opportunity may prove to be a costly mistake.