By Danilo Masoni and Helen Reid

MILAN/LONDON - European shares are seen moving sideways until end-2019 and making just modest gains thereafter, a Reuters poll showed, as investors shy away from big bets on a region whose export-oriented economy makes it vulnerable to trade war risks.

A darkening political outlook following a European Parliament election that made Brexit more complicated and revived concerns about fiscal slippage in Italy is also curbing appetite for equities in Europe, even though earnings show signs of stabilising.

Europe's main index ended last week up around 11% so far this year, but it has pulled back from a nine-month peak hit in April before escalating trade tensions between Washington and Beijing drove investors to dump equities globally.

"It's all about the U.S.-China trade war and Europe is trapped in the middle of it," said Stefan de Schutter, portfolio manager at Alpha Trading in Frankfurt.

With visibility over trade and politics low, shares' prospects for coming months are uncertain.

According to the survey of 29 brokers, fund managers and analysts taken May 20-28, the pan-European STOXX 600 benchmark is seen ending the year at 380 points, just 1% above the level it ended last week.

That would be a 12.5% rise for the year, its biggest yearly gain since 2013. Compared with the previous quarterly poll carried out in February, the current forecast is just 9 points above what was indicated then.

"If the trade discussions deteriorate, there could be significant further downside and defensive leadership. Should there be de-escalation, then there is scope for equities in Europe to regain momentum thanks to some recovery in domestic growth numbers and improving earnings momentum," he added.

This is the second quarterly poll in a row that has revealed a broad range of forecasts and only modest changes from current levels. That suggests investors are still struggling to interpret the impact of the trade battle between the world's two largest economies and recent mixed economic data.

Particularly exposed to trade, Europe could suffer from a slowdown in global business activity in the event of greater tariff barriers.

Among investors with a mid-point forecast for end-2019 and who expect mild gains next year is Tomas Hildebrandt, senior portfolio manager at Evli Bank in Helsinki.

"The global uncertainties don't speak for overweighting Europe, but positioning seems already to be very careful. This leaves room for positive surprises," he said. "Nevertheless Europe needs to overcome the political issues nagging its outlook. We trust common sense will prevail".

European equities have witnessed continued fund outflows and while that indicated a lack of conviction over the bounce seen at the start of the year, it could also help any future rebound gather pace once trade and political clouds clear up.

On top of that, a run of downgrades to European companies' profit estimates has slowed, while valuation multiples show a discount relative to the United States.

There were fewer estimates for 2020 compared to 2019, possibly reflecting the depth of uncertainty beyond six months. 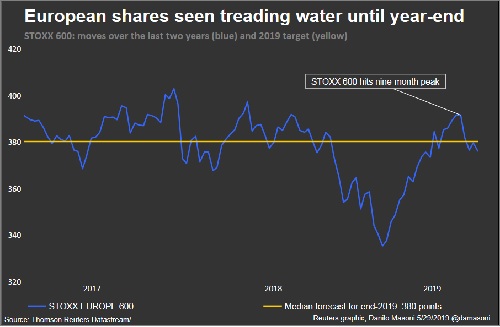 The only major European index which could post declines at mid-2020 compared to Friday levels is the trade-sensitive German DAX benchmark. The median forecast sees the equity index of Europe's biggest economy, which is particularly sensitive to trade tensions, at 12,000 and 11,900 points by end-2019 and mid-2020, respectively.

In Britain, the FTSE 100 will only manage modest gains in the second half as the nation's tortuous exit from the European Union hangs over the market.