Views On 3 Years Of DeMo: How Has It Fared For Realty Sector? - Shishir Baijal

Below is the Views On 3 Years Of DeMo: How Has It Fared For Realty Sector? By Shishir Baijal, Chairman & Managing Director, Knight Frank India

The real estate sector, which had historically served as a safe haven for black money, was hit hard by one of the biggest cleansing measures by the government in the form of Demonetisation on 08, November 2016.

It coincided with a time period when the housing sector, which was then reeling under slow sales and increasing inventory overhang for around three years, was looking up to some form of recovery, with the climate steadily becoming conducive to trigger the fence-sitters for making their home purchases, on the back of government measures such as Smart Cities, Housing for All 2022 and AMRUT.

However, with demonetisation, the real estate sector was inflicted with a major disruption, which further postponed its recovery process.

Demonetization sucked out a lot of liquidity out of system, by slowly depleting the parallel cash economy. Other reform measures that had been introduced around the same time also had major impact on the real estate sector.

The Real Estate Regulatory Authority (RERA), which was introduced in 2016, created a crunch on the supply side for sometime till all the projects became RERA certified. The Insolvency and Bankruptcy Code (IBC) also created some level of uncertainty for a number of developers who had weak finances, which led to many companies shutting shop. The Goods and Services Taxes (GST), which was introduced to formalize the sector, also added to the woes in the interim.

On the whole, the combined impact was massive and it took some time for the markets to adjust to the paradigm shift and structural change in the market. The sector’s transformation towards transparency and formal business practices may have impacted the housing sales in the short-term; but all of us would agree that it was a much-needed change.

Demonetisation made sure that paying taxes was not just the honest man's responsibility. It targeted those unscrupulous practitioners who evaded taxes and black money holders who could use such currency to artificially inflate market pricing and to sponsor terrorism.

Demonetisation did leave many willing homebuyers cash strapped for a while but only to infuse the system with greater transparency. The buyer is confident now that builders or real estate agents cannot cheat him and cannot demand unaccounted money. The move also pushed banks to go in for home loan rate cuts, making buying homes cheaper.

However, three years has passed since Demonetisation, but the real estate sector is still far from recovery, with around 4.5 lakh houses still remaining unsold in the market as on June 30, 2019. As measured by the Knight Frank – FICCI – NAREDCO Real Estate Sentiment Index, the current sentiment index of the real estate supply-side stakeholders has plummeted to 42 in the July-September quarter of 2019 (Q3 2019), a level previously seen during the demonetisation period (41) in the last quarter of 2016. This has happened despite a slew of measures to arrest the slump by the government and the Reserve Bank of India (RBI) to boost liquidity and revive demand. 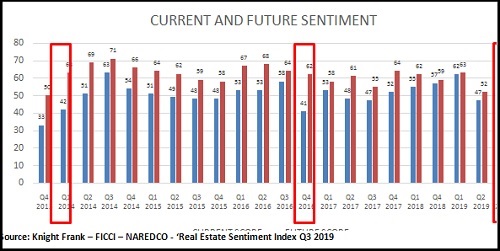 What's even more alarming is that the future sentiment, or the outlook for the coming six months, has also turned 'pessimistic' for the first time for the real estate stakeholders.In terms of zonal data as well, all the zones have seen a reduction in their respective future scores since the Demonetisation period of Q4 2016.

The demonetization decision was also expected to rationalize prices, which is now reflected in house prices which have corrected by as much as 30% in some markets. However, that has not revived demand actively from domestic buyers or NRIs.

Potential buyers are only buying if there is a need to self-occupy, and speculative buyers are staying away from the market thereby contracting the market size significantly. The residential market has begun to revive from the affordable end of the market and there is a slow and steady increase in buyers. However, buyers are currently observing the growth in the Indian economy before taking buying decisions.

To sum it all, while the measures like demonetization have surely formalised the real estate sector, ably helped by policy measures like GST and RERA, the recovery is not in sight anytime soon due to a severe liquidity crunch on NBFC crisis, and the overall economic slowdown. However, the positive news is the government is privy of the issue and is taking measures to solve both supply and demand related issue, which will surely help in boosting recovery of the sector.