First they twisted. Then they swapped. And then they tripped over a bond vigilante.

India’s central bank may have played the bond yield curve through its Operation Twist and even done a swap with the government directly. But nothing prepared it and bond investors for the rude shock of inflation.

The retail inflation print for December came in at a shocking 7.35%. Having breached the sacred 2-6% flexible inflation target, this is enough to put the monetary policy committee (MPC) on guard. 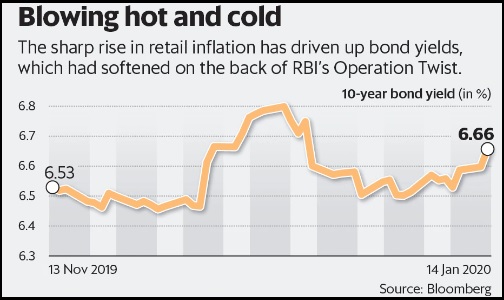 The outlook on retail inflation is further worsened by fired-up global crude oil prices and the tariff hikes by telecom companies.

Obviously, policy rate cuts are not coming for an extended period of time now. “This was truly a quintessential surprise. It is likely that headline could be near 7% for some time and that is a very awkward situation for the MPC," said Abheek Barua, chief economist and and executive vice president at HDFC Bank Ltd.

Understandably, the yield on the benchmark 10-year bond rose as much as 10 basis points intraday on Tuesday, before cooling off a bit to settle 6 basis points higher. A basis point is one-hundredth of a percentage point.

The nasty inflation number has threatened to undo all the good work by the Reserve Bank of India (RBI) through its Operation Twist.

The central bank has so far bought long-term bonds and sold short-term ones in a bid to flatten the yield curve.

In other words, RBI wants long-term yields to soften. Between 19 December, when the central bank started this operation, and last week, yields had softened 15 basis points.

Then there is the joker in the pack called fiscal deficit. Analysts forecast the deficit to widen to at least 3.8% of gross domestic product (GDP) for FY20. What they await is the government’s acknowledgement that its finances are not pretty. The sharply lower nominal GDP growth of 7.5% for FY20, projected by the Central Statistical Office, has already upset the budget math.

Ergo, all eyes are now on the Union budget for FY21, which will be presented on 1 February. An unfriendly fiscal deficit number could push up bond yields further.

The government would do well to remember that hell hath no fury like a bond market scorned.a

Toyota Fortuner Facelift To Be Unveiled On June 4