Lower corporate tax may not be enough to jump-start economy

MUMBAI : The slowing of economic growth to a six-year low of 5% in the June quarter is partly because Indians have either stopped buying or postponed their purchases of goods.

The easiest way to make people spend is to give cash in their hands or make them believe that money is on the way. Last week’s corporate tax cut by the government doesn’t give much on this front.

Instead, the government said that Indian companies will now have to pay effectively a tax of 25.17%, a sharp drop from the effective rate of 34.94% earlier. The benefits are immense, as for every rupee of profit a company makes progressively, it has more with itself to invest or pass on to consumers through price cuts. 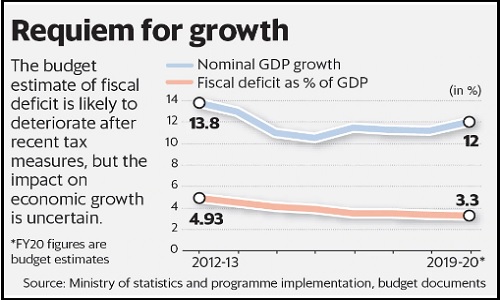 The big boost to shareholder value is unmistakable and the equity market showed its appreciation by surging the most in a single day in over a decade. Companies of course hailed the decision, with some even stating this would boost investment.

Moribund investments were the trigger of the growth slowdown and the tax cut partly fixes this supply-side problem. That said, the government cannot rely on a tax cut alone, and needs a monetary boost through further policy rate cuts and, perhaps, even increase its spending. “Recall that the fiscal boost in 2008-09 proved to be quite effective in lifting aggregate demand because it was led by both tax cuts and expenditure ramp-up, accompanied by massive monetary easing and concurrent with global fiscal stimulus," wrote analysts at Edelweiss Securities in a note. While rate cuts are still expected to be on the table, it is too much to ask for increased spending from the government, given its fiscal position.

Investors are hoping that with retail headline inflation expected to stay below the formal target of 4% and with growth slowing, the Reserve Bank of India would be inclined to cut policy rates again in October. “The fiscal loosening measures may influence the size of future rate cuts, but probably won’t take them off the table altogether. Our best guess is that the MPC (monetary policy committee) will revert to a more traditional 25bp cut at the upcoming meeting in early October," says Shilan Shah, senior India economist at London-based research firm Capital Economics.

While the Centre has already curtailed spending to some extent simply because it didn’t get enough money through tax revenues, it may end up tightening its belt some more. Still, economists estimate the fiscal deficit to widen to 3.8-4% against the budgeted 3.3% of GDP.

Juxtapose this with the fact that public sector borrowing requirement that includes borrowings of the central government, state governments and public sector enterprises such as the Food Corporation of India is at nearly 9% of GDP, there is no penny left for the government to spend. At this level, household savings are absorbed by the public sector almost in entirety. No wonder, bond markets were spooked with the tax cut announcements on Friday. “The deficit target will eventually need to be relaxed, perhaps to 3.6% of GDP," Shah says. “The bond market appears to agree: the 10-year yield has jumped by 30bps since the announcement."

The negative effects of a wide fiscal deficit on borrowing costs cannot be ignored, and hence, it is important to ask whether the benefits to the economy justify the fiscal costs.

To be sure, in a depressed economy, when inflation is low, there is hardly any incentive for the producer to invest in fixed assets or create capacity. Analysts worry that much of the tax cut will go into savings rather than investments. That brings us full circle to the demand side of the economy.

The austerity among Indians has come partly due to wage stagnation even as cost of living went up and also because prospects of income look bleak. The pain is deeper in rural India. For this to change, companies have to lower prices of products or share their profits through wage hikes. Public spending too has to increase. Will the government and Indian companies bite this bullet?