The U.S. 10-year Treasury note yield fell 3.8 basis points to a low of 0.636%, extending the weekly drop to 6 basis points. The 2-year note rate fell 1.8 basis points to 0.166%, marking its lowest level since June 2. Meanwhile, the 30-year bond yield fell 4.5 basis points to 1.372%, marking its lowest point since May 15, contributing to a 9.7 basis point decline for the week. Safe-haven inflows into the bond-market helped to pin Treasury yields to the low end of their trading range as the market grappled with record rises in new U.S. COVID-19 cases concentrated across in southern and western states, with some governors halting business reopening plans. Texas and Florida both ordered the closure of bars on Friday, raising doubts over investors’ assumption that state and local governments wouldn’t reinstate lockdown measures. The yields on the 3-year and 5-year Treasury notes sank to record lows of 0.17% and 0.29%, respectively. In U.S. economic data, consumer spending climbed in May to a record 8.2% after tumbling in April, however, personal incomes sank 4.2% last month.

The market will look ahead the development with China and if any thing which worsen the situation will lead to the sell off in the Bond Market and 10 year benchmark may move ahead 6 percent mark. But considering what happened at the U.S. market on Friday the market will open on positive note as the U.S. 5 year Treasury note touched the record low of 0.29% and the Fed and the Bank of England may consider yield control as they are running out of tools with rates at near zero or negative. Bank of Japan has a 0% target for the 10-year yield, while Australia has set a 0.25% target for the three-year yield after dropping rates to historic lows. India and most major emerging markets have policy rates way above zero. If they embark on programs that involve creating reserve money to buy government bonds, effective rates will fall below the policy rate. The RBI has bought 1.2 trillion rupees ($15.8 billion) of debt since the fiscal year began April 1 and conducted 100 billion rupees of ‘Operation Twist’ in April. We expect RBI to intervene more through OMO Purchase or Operational Twist in the time ahead as the huge government borrowings number around Rs.17.50 Lakh crore (Both Central & State) might put pressure and the yield may not fall substantially which is required to stimulate the economy at the faster pace.

Yield Outlook For the week 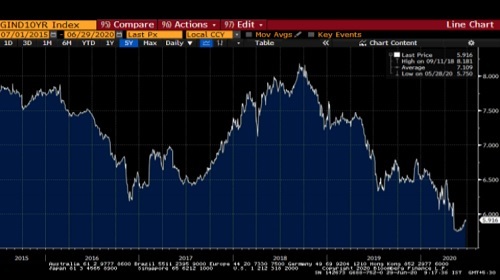 Nifty at 4-months high, base shifts at 10300 by Mr. Sameet Chavan, Angel Broking