* The euro touched $1.214 in afternoon trading on Friday, moving closer to the previous week's twomonth high of $1.215, as investors dumped the dollar following the release of a weak US jobs report. Also, the Eurozone PMI survey released earlier this week showed the bloc's private sector activity grew at a faster pace in April, as the service activity returned to growth; and the Eurozone retail sales rose firmly in March, despite renewed lockdown measures. The euro booked in April a 2.5% monthly gain against the greenback, supported by optimism about a strong economic recovery and signs of acceleration in the vaccination pace in Europe.

* The British firmed above $1.39 in the afternoon trading on Friday, after a weaker-than-expected US employment report hit the dollar. On Thursday, the Bank of England kept its monetary policy unchanged and announced a slowdown in the pace of purchases of British government bonds to £3.4 billion per week, from £4.4 billion previously, signaling it is on course to end emergency support later this year. The Bank raised its estimate for UK GDP growth to 7.25% in 2021, up from a previous forecast of 5%, as easing restrictions on economic activity and faster-than-expected recovery from the pandemic crisis.

* The dollar index bottomed around 90.20 on Friday, a level not seen since late February, and recording its worst week since November 2020 in reaction to a payroll report that showed the US economy only added 266,000 jobs in April, well below market expectations of almost one million. Earlier this week, the greenback touched a twoweek high of 91.40 after Treasury Secretary Janet Yellen Yellen remarks’ created speculation that the Fed may have to scale back its support for the economy sooner than expected to stop the economy from overheating. 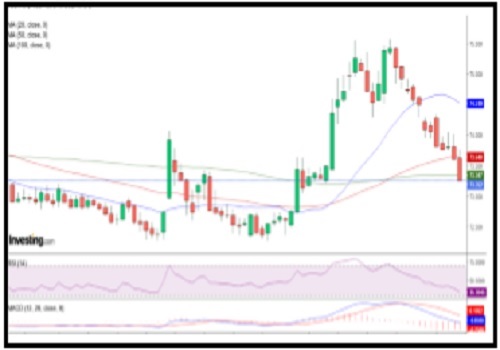 The USDINR bulls have taken a breather after Yellen`s remarks By Rahul Gupta, Emkay Global

The hopes of further stimulus under the Biden`s administration By Rahul Gupta, Emkay Global

The volatility in FX will increase as there is an event risk ahead of budget and RBI policy By Rahul Gupta, Emkay Global

The USDINR spot is not breaking the narrow range of 72.75-73.20 By Rahul Gupta, Emkay Global

USDINR Spot hit a low of 72.70 which is the crucial support zone By Rahul Gupta, Emkay Global

Equities are charged on `risk-on` tone as countries By Rahul Gupta, Emkay Global

Local equities have seen healthy inflows since the announcement of the budget By Sugandha Sachdeva, Religare Broking

The Indian rupee has been gradually inching lower By Sugandha Sachdeva, Religare Broking