* Indian markets were shut yesterday on account of Assembly elections in Maharashtra.

* On the data front, US existing home sales is scheduled to be released in the later part of the day.

* Euro was steady despite improving German PPI while UK's pound hovered near five and half month high on Brexit developments.

On the last trading day of the previous week, Indian currency ended on a flat note amid weak greenback and fall in crude oil prices. RBI minutes from its recent monetary meeting was also watched by the investors. Rupee on Friday, opened at 71.20 and moved in a range of 71.31 and 71.05 during the day before ending the session at 71.14 against its previous close of 71.16. On Thursday, Indian unit appreciated by 27 paise.

FIIs continued to be buyers in the capital market segment; bought shares worth Rs 36.56cr as per exchange's provisional figures on 18 Oct while DIIs, on the other end bought equiities worth Rs 586.88cr for the same period. Oil bounced from its early losses and were steady as demand concerns continued to weigh on the prices. After market hours RBI minutes was released, where the central bank showed the need to track the fiscal situations and signed more rate cuts on the way. For the week ended Oct 11, RBI's forex kitty swelled by $4.24 billion to a new life time high of USD 439.712 billion. 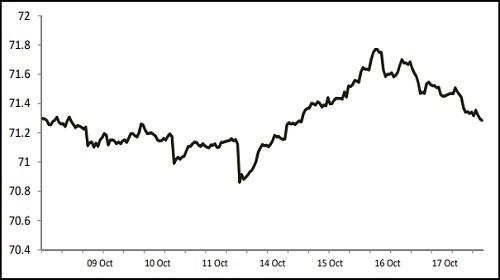 Canada ready to spend C$14 billion to get people back to work safely, PM Trudeau says