*  In the minutes of June 6 monetary policy meet, RBI highlighted concern about weakening economic growth, and suggested slower core inflation and better anchoring of inflation expectations enabled the central bank to cut the policy rate earlier this month. The MPC was also unanimous in its decision to switch the policy stance to accommodative from neutral.

*  President Trump pulled back from strikes against Iran late Thursday, hours after approving them in retaliation for downing of drone.

*  The geopolitical concern and trade war remain in the center stage for global economy.

*  The Bloomberg dollar index had its biggest two day slump since February 2018 as Federal Reserve hinted for easing path going ahead. Global central banks are now in Chorus of lower interest rates as after ECB, the Fed, BoJ and BoE monetary policy meet.

*  The Bank of England acknowledged rising concerns over a no deal Brexit as it kept interest rates on hold and cut its near-term economic growth forecast to zero.

*  Crude oil jumped the most this year, closing 5.4% higher, after U.S. President Donald Trump said Iran made “a very big mistake” following the downing of an American drone in the Persian Gulf. Trump later appeared to downplay the attack, saying a “loose and stupid” individual may have been culpable

*  Momentum oscillator, RSI of 14 days period given negative cross over and reversing from center line. 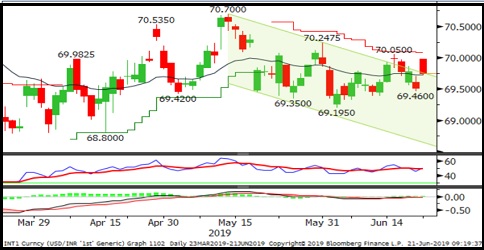