Indian rupee in line with other Asian peers gained in the week gone on vaccine optimism and risk-on trade. Domestic indices touched all time high amid expectation of fast economic recovery. Marketmen expecting 2021 will present a positive backdrop for risk assets, as the likely availability of a COVID-19 vaccine would support an economic rebound. However, the risk of second wave remains high after festive as some of the states imposed curfew after surge in virus cases.

Indian rupee closed at 74.19 a dollar with the gains of 41 paise or 0.55%. The biggest reasons for gain was central bank’s intervention and weaker dollar index.

China’s holding of US Treasury debt fell by $6.3 billion to $1.062 trillion at the end of Sept. from previous month, the lowest since February 2017 and fourth straight decline, as per the US Dept of Treasury.

As per the CFTC data, the major flow was a reversal of the previous week’s yen purchases, as 12.2k contracts were sold. Flow elsewhere was very modest and mixed across currencies. Thanks largely to the yen sales, the aggregate dollar short fell by approximately $1.4 billion.

Among the major trading currencies pound gained against dollar on hope of Brexit deal. Last week’s meet ended with guidance that a senior negotiator on the EU side tested positive and sent the rest scattering into quarantine.

This week, we will see the rebound in Indian GDP after worst number in previous quarters as economy back on track after lockdown. India should see about 15% QoQ GDP surge in 3Q, though that still corresponds to about -8.5% YoY fall. Markets will be watching the US FOMC minutes for signals of changes in the size or composition of asset purchases, though such clues are quite unlikely.

Momentum oscillators on daily and weekly charts are indicating weakness in the pair.

Momentum Indicator, MACD has given negative cross over and heading towards zero line.

We expect the recent consolidation to continue next week ahead of the November month expiry. Broadly, USDINR December futures expected to trade in the range of 74 to 74.75. 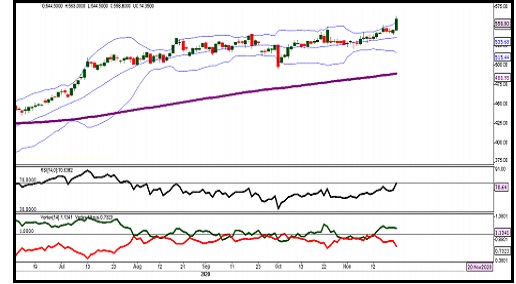 EURINR December futures has been trading in the rising channel with higher highs and lows suggesting bullishness.

It has been holding the short term moving average support on daily chart.

The formation of Doji candle at end of the week and negative cross over and divergence by momentum oscillators on daily chart suggesting consolidation and suggesting pair could retest the level of 87.55, the 50 DMA

We remain bullish in EURINR December futures till it holds the level of 87.50 while on higher side it has the resistance around 89 odd levels. 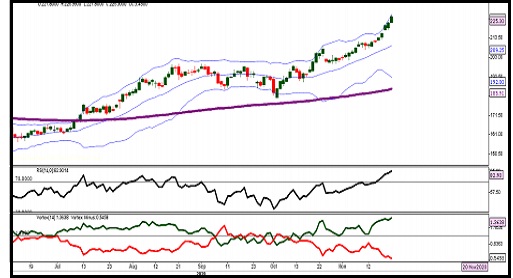 GBPINR December Futures is in up trend with higher top higher bottom on daily and weekly chart. The spread between short term and medium term moving averages are higher suggesting bullish momentum.

The pair has support around 97.80 odd levels and resistance of psychological level of 100.

We remain bullish in GBPINR December futures and advising buying on down swing with higher side target of 100 and more while level below 96.75 will negate the said view. 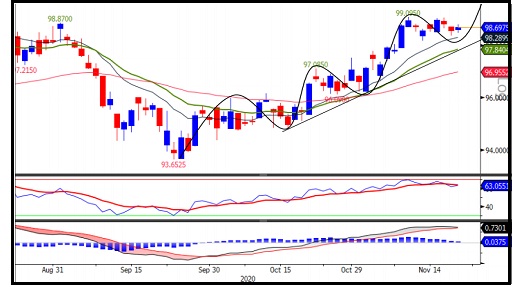 The pair has strong support around 70.75, the 50 DMA while multi month high around 72 acting as resistance.

Momentum oscillators and indicators turned flat unable to give clear direction in the pair.

The pair is expected to trade in broad range of 69 to 72. 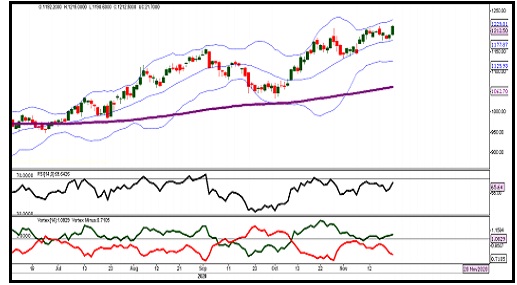 Right now the risk sentiments are stuck in the race of covid-cases By Rahul Gupta, Emkay Global

We are witnessing a reversal in the dollar index By Sugandha Sachdeva, Religare Broking

After a pandemic ravaged year, the risk sentiments are ending 2020 By Rahul Gupta, Emkay Global

We advise investors to avoid use of leverage in this volatile market By Keshav Lahoti, Angel Broking

We expect the rupee to quote in the range of 73.80 and 74.40 By Gaurang Somaiya, Motilal Oswal

The big risk to the currency market is the uncertainty over the new US President By Rahul Gupta, Emkay Global

USDINR trading above 74 are higher and expect the spot pair to trade within 73.50-74.50 By Rahul Gupta, Emkay Global