* Market participants shrugged off India’s rating downgrade by Moody’s as it was already expected and came in line with other agencies rating.

* Rupee closed at the highest level in over a month against the US dollar due to optimism about global economic recovery coupled with persistent foreign fund inflow.

* Technically, spot USDINR has given the clear indication of down trend. The pair likely to touch 75 odd levels in coming days. Most of the currencies gained as risky rallied continued with global stocks continued its northbound journey and the greenback approached a three-month low.

* The stunning rise for the Caixin China Services PMI to 55 may add more fuel for risky asset bulls.

* Brent crude futures have reached $40/bbl for the first time since their meltdown in early March, which is another piece of the riskon puzzle falling into place.

* The euro’s momentum is driven by European fiscal and monetary stimulus coming together in a way that hasn’t been seen since the formation of the shared currency. There was a mild setback overnight, when Angela Merkel was unable to get a stimulus package for Germany signed off. But the deal isn’t dead and the ECB lies ahead this week, with an increase in bond buying likely to be confirmed 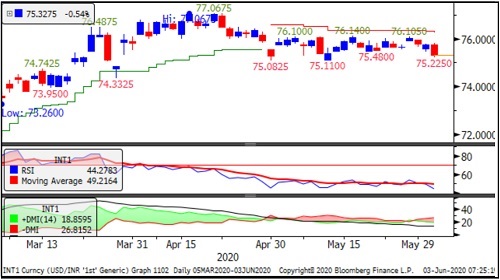 * We expect the pair likely to head south in today’s trade and may breach the level of 75. The close below 75 will confirm the resumption of down move