Indian Rupee ended at 75.76 yesterday, down 5 paise against its previous close of 75.71 - Geojit Financial

* US dollar was steady ahead of US President’s press conference on China today.

* In speech side, today Fed Chairman Powell is scheduled to speak.

* Euro rose while UK’s pound fell on concerns over Brexit. 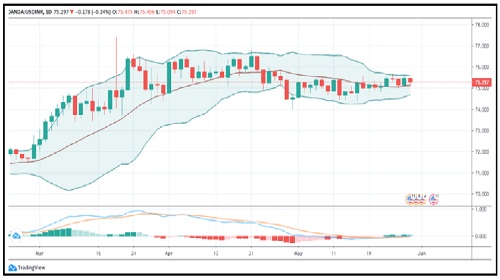 Despite a positive domestic equity markets, the Indian currency fell for a second day in line with other Asian peers tracking the escalating US-China tensions. Local unit yesterday opened at 75.90 a dollar and drifted in a range of 75.69 and 75.90 before settling the day at 75.76 against its previous close of 75.71. On Wednesday, Rupee depreciated by 5 paise. FIIs were buyers in the capital market segment; bought shares worth Rs 2354.14cr on 28 May as per the exchange’s provisional figures. DIIs, on the other end were also buyers to the tune of Rs 144.83cr for the same period. Oil prices slipped on weak EIA data. Now, the investors will focus on major economic data (GDP and eight core industries) from domestic front along with Trump’s speech and coronavirus cases.