* US dollar fell against a basket of currencies as waited Fed policy outcome.

* Euro was unchanged while UK's pound was flat after British lawmakers backed a snap election on Dec 12.

* Japan’s yen steadied after snapping a two-day decline as players stayed to the sidelines ahead of the Federal Reserve’s rate decision later Wednesday.

Tracking the gains in the domestic equities and easing oil prices aided the Indian unit, that closed higher for a second day. Investors also focused on the Oct expiry of currency futures yesterday. Rupee on Tuesday opened at 70.72 a dollar and moved in the range of 70.68 and 70.91 before ending the session at 70.84 against its Friday's close of 70.88. Indian markets were closed on Monday on account of Diwali holiday.

FIIs turned buyers in the capital market segment; bought shares worth Rs 876.64cr as per exchange's provisional figures. DIIs, on the other end were also buyers to the tune of Rs 144.75cr for the same period. Oil prices fell for a third day after data showed rise in the stock piles. For markets around the globe were focusing on the US central bank meeting decision that scheduled later today. 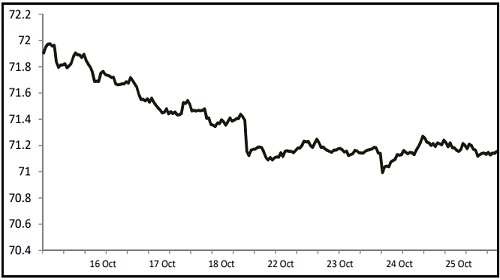