* On the data side, initial and continuing jobless claims are due today.

* BoE is set to meet for its policy meeting today.

* Japan’s yen traded near a seven-week low as markets await a BOJ decision after the Fed cut rates.

Easing oil prices helped the domestic currency to snap its two day losing streak, which closed higher by 54 paise. However, the continued capital outflows restricted more uptrend. Local unit yesterday opened at 71.47 a dollar and made an intraday high of 71.17 before settling the day at 71.24 against its previous close of 71.18. In the previous two day, Rupee lost 86 paise.

Oil prices stabilized after Saudi Arabia said that its partially restored its daily crude oil production and will return to full production soon. US central bank yesterday released its policy statement and FOMC reduced its interest rates by 25bps as expected by the markets. Fed in its meeting but prevented to give a clear idea on next rate cut based on current economic outlook. Now BoJ will deliver its policy meeting details today followed by BoE later in the day. Investors around the globe will also look into US-China trade discussions slated today. 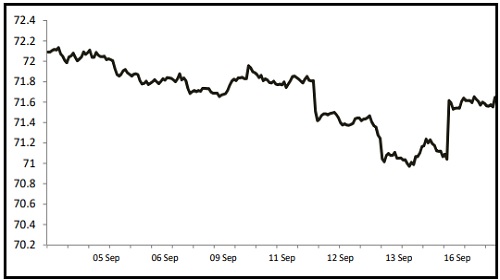