* Indian rupee along with other Asian currencies gain in early trade. Rupee opened at 71.21 up 13 paise from previous close. Spot USDINR is having support at 70.95 and resistance at 71.53.

* RBI Governor Shaktikanta Das said the rupee is fairly valued and broadly in line with fundamentals as the International Monetary Fund estimates the real effective exchange rate gap to be zero.

* The global economy is likely to grow at its lowest pace since the financial crisis, expanding 2.9% in 2019 and 3% in 2020, according to the OECD. Trade conflicts make up a major factor of less confidence, growth and job creation in the world economy, the OECD says in its latest interim economic outlook.

* The pound surged to the highest level in two months against the greenback amid a report that European Commission President JeanClaude Juncker thinks a Brexit deal can be reached by Oct. 31. Pound rose to highest level since July 15.

* Talks between a Chinese delegation led by Liao Min, a vice minister for finance, and Deputy U.S. Trade Representative Jeffrey Gerrish began Thursday and are scheduled to continue Friday. The negotiations are expected to lay the ground-work for top-level negotiations between U.S. Trade Representative Robert Lighthizer, Treasury Secretary Steven Mnuchin and Vice Premier Liu He in October in Washington. An exact date for that meeting hasn’t been released.

* China's new benchmark lending rate fell for the second month in a row in September. The one-year Loan Prime Rate fell to 4.2% in September, down from 4.25% in August.. 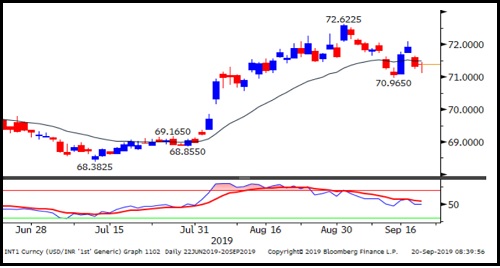