Indian rupee weakens against US dollar on Monday

BENGALURU/JOHANNESBURG - Volatility in high-risk, high-return emerging market currencies is set to persist amid fears of a "taper tantrum" once the U.S. Federal Reserve starts cutting its bond buying, according to analysts who say a sell-off is likely in the next three months.

A majority of FX strategists in the Aug. 30-Sept. 2 Reuters poll said recent dollar weakness would be temporary as the day the Fed eventually decides to taper its $120 billion of monthly purchases approaches, likely pushing U.S. yields higher.

High-beta currencies - those with the most risk but also offering the greatest potential for returns such as the Brazilian real and South African rand - are set to drive overall currency volatility over the next 12 months.

While the Fed is not expected to shift gears for another few months, any move by markets to price in a more hawkish stance could weigh on high-beta, CEE and commodity FX, but less so on EM Asia FX, Barclays strategists wrote in a note.

Most emerging market currencies were forecast to weaken or at best cling to a range over the next three to six months as U.S. stimulus withdrawal could push investors to shun the currencies coined the "fragile five" as they did in 2013.

These include the currencies of Brazil, India, Indonesia, Turkey and South Africa.

However, the real has benefited from 325 basis points of interest rate hikes this year compared with none for the rand, though Brazil's economy shrank slightly in Q2.

The South African Reserve Bank is not expected to kick off its first hike in this cycle until early next year.

"We disagree with those who believe that EM is in a more resilient position now than it was on the eve of the 2013 taper tantrum," wrote Rob Subbaraman, chief economist at Nomura.

"EM has developed new sources of vulnerability, with a combination of chronically weak growth, rising inflation and a marked deterioration in fiscal finances."

Subbaraman said the prospect of the Fed normalizing monetary policy amid China's slowing economic growth was a "dreadful" combination for EM, only to be made worse.

Reuters poll graphic on the outlook for USD/ZAR, USD/CNY,USD/RUB and USD/INR: 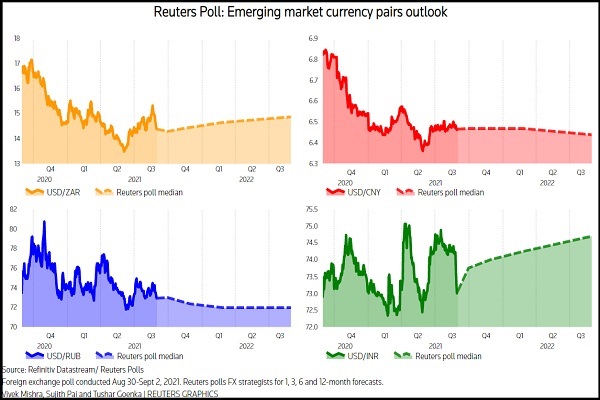 Over 80% of analysts, 48 of 57, who answered a separate question said volatility in emerging market currencies over the coming three months would increase. The other nine said it would decrease.

Nearly 60% of 58 FX strategists said a sell-off in emerging market currencies in the next three months was likely, including two who said very likely. 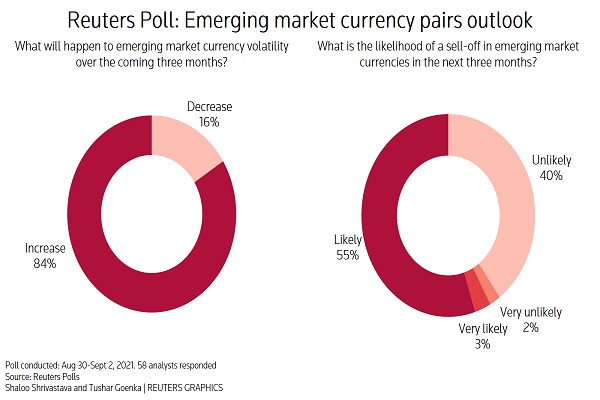 Still, a lot will depend on how U.S. job market data turn out in coming months. Weaker-than-expected numbers could support the case for the Fed holding off on tapering, adding further pressure on the U.S. dollar.

China's currency regulator has asked banks and companies about their ability to handle volatility in the yuan, suggesting intervention could follow as the Fed and other central banks wean economies off massive pandemic-era stimulus.

In 2013, the yuan and the rupee fared much better in the short-term against the dollar, but joined the fragile five in heavy losses the following year.

This time the heavily controlled yuan was predicted to trade in a tight range in 12 months although more losses are possible in the event of a faster taper.

(For other stories from the Sept Reuters foreign exchange poll:)

Indian rupee weakens against US dollar on Monday

View on Currency Update by Heena Naik, Angel One Ltd