India may look to lock in oil futures to stem rupee slide: source

Oil markets in balance, thanks to OPEC cuts - Yes Securities

Oil slides 1% on renewed fears over toll from coronavirus

BENGALURU - Oil prices fell about 1% on Friday on renewed concerns about crude demand being pinched by the economic impact of the coronavirus outbreak, while OPEC and allied producers appeared to be in no rush to curb output.

The latest signs of infections outside the Hubei province epicentre in China spurred a selloff across financial markets, as G20 policymakers travelled to Saudi Arabia for talks on the global economy.

Both benchmarks were on track for their second consecutive weekly rise, with Brent up 2% and U.S. crude rising 2.6%, as fears over the virus' impact on demand eased earlier in the week and after a smaller-than-expected U.S. crude stock build.

"It's safe to say that uncertainty (surrounding coronavirus) has returned with a vengeance," said Ole Hansen, head of commodity strategy, Saxo Bank.

"We have to acknowledge that we're dealing with the biggest demand shock since the financial crisis... Until we see China getting back to work, the virus will be the main focus."

In the latest sign of the economic hit, U.S. business activity in the manufacturing and services sectors stalled in February.

Concerns over the virus have largely overshadowed risks to supply, including the latest blockade in Libya, said Edward Moya, senior market analyst at OANDA in New York.

The United Nations said ceasefire talks were back on track between forces fighting over Libya's capital. Meanwhile, Yemen's Houthis said they had struck facilities of Saudi oil giant Aramco in the Red Sea port of Yanbu. 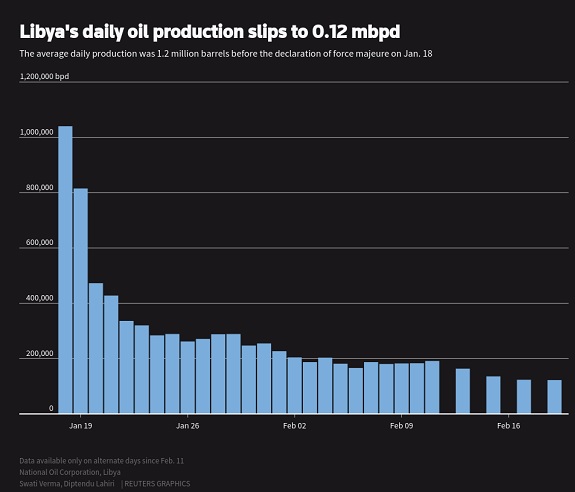 OANDA's Moya also pointed to signs the Organization of the Petroleum Exporting Countries (OPEC) was unlikely to cut supplies further.

Russian Energy Minister Alexander Novak said on Thursday that producers understood it would no longer make sense to meet before a planned gathering in March.

"Concerns the Saudis and Russians are struggling to agree on the appropriate response to the demand destruction the coronavirus has created," were pressuring prices, Moya said.

In the United States, the oil rig count, an indicator of future production, rose for a third straight week. Drillers added one oil rig this week, bringing the total count to 679, the highest since the week of Dec. 20, energy services firm Baker Hughes Co said. 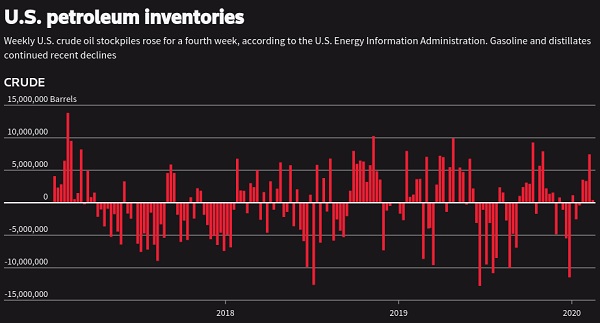 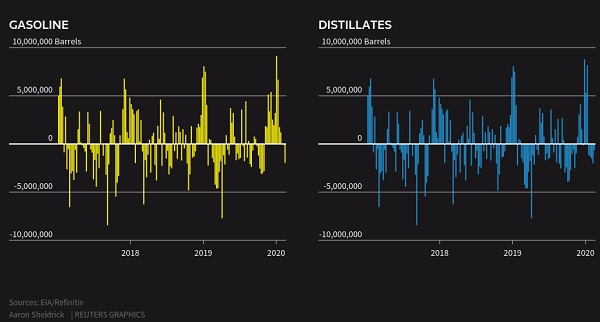 (Additional reporting by Bozorgmehr Sharafedin in London and Aaron Sheldrick in Tokyo; Editing by Marguerita Choy and David Gregorio)

India may look to lock in oil futures to stem rupee slide: source

Oil markets in balance, thanks to OPEC cuts - Yes Securities

High crude oil prices just one worry for India; let`s not ignore the other risks

The knowns and unknowns of U.S. Iran oil sanction waivers