High crude oil prices just one worry for India; let`s not ignore the other risks

MUMBAI: For a country that imports the lion’s share of its oil requirements, high prices are never good news. So, when Brent crude prices rose to over $75 a barrel, there was some worry on the Street.

NSE’s volatility index (India VIX), often referred to as a fear gauge, surged to a three-year high of 24.6 on Tuesday. Analysts said this was due to a combination of high oil prices and the anxiety surrounding the ongoing general elections. Also, the rupee breached the 70 mark against the dollar. 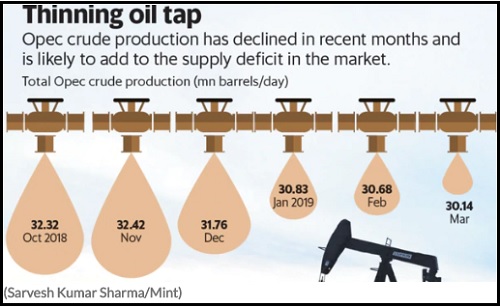 While oil prices have receded to about $72.15 a barrel, it must be noted that they are about 34% higher so far this year. The rise in oil comes against the backdrop of unimpressive corporate results, low job creation, a slowdown in domestic consumption, fears of a subpar monsoon and muted private sector capital expenditure (capex).

Election-related nervousness has kept Indian equities volatile. Even so, the S&P Nifty 50 index has increased by about 8.21% so far this year.

Clearly, there are many domestic headwinds that the economy is battling. But first, what about the outlook on oil prices? According to Ritesh Jain, a macro investor, “The global oil markets have a geopolitical risk premium now, which means volatility will be high in the oil markets and crude prices are having support at higher levels."

The so-called black gold is expected to shimmer due to feared supply shortage. Kotak Institutional Equities expects global crude prices to remain elevated amid curtailment of supplies, led by nearly 1 million barrels a day (mn b/d) of reduction in Iran’s crude exports due to the US decision to end sanction waivers on the country. Secondly, partial disruption of about 1.1 mn b/d of Libyan oil production too will weigh on crude prices.

It would be interesting to watch whether Saudi Arabia and the remaining members of the Organization of the Petroleum Exporting Countries (Opec) compensate for lack of oil supplies from Iran, added Jain. Already, as the adjacent chart shows, Opec’s crude production has declined in recent months thanks to output cuts.

In November, the US granted a waiver to eight countries, including India, to continue importing oil from Iran. This ends on 2 May.

Oil is a critical commodity for India, so changes in oil dynamics will have repercussions on the fiscal math, inflation and financial markets. However, Indian equities seem oblivious to these concerns.

“External policies dictate oil price movement, there isn’t much one can do about it,"an economist at a multinational brokerage said on condition of anonymity. “Domestic issues such as consumption slowdown and muted private capex are equally important risks for the Indian economy."

Meanwhile, in the next one month, India will elect its new government and that is the big trigger to watch out for. Even if a pro-market government comes to power, the road ahead is not smooth. “We have been highlighting India’s structural and cyclical macroeconomic challenges, which the new government will have to overcome to accelerate India’s GDP growth," said analysts at Kotak Institutional Equities.

Russian oil output jumped to 11.35 million bpd in April, ahead of cuts

When oil became waste: a week of turmoil for crude, and more pain to come