* Bullion prices gained amid concerns about another daily surge in coronavirus cases in the U.S. and several other countries across the world. However upside seen limited as global stocks moved up after some positive economic data and encouraging news on coronavirus vaccine. Physical gold sold at a premium in India for the first time this year, driven by plunging imports and a near halt in smuggling that offset the impact of high unemployment

* A surge in coronavirus cases that threatens to pinch consumer spending and job gains just as some stimulus programs are due to expire has Federal Reserve policymakers worried, with at least one pledging more support ahead from the U.S. central bank. “We have a lot of accommodation in place; there’s more that we can do, there’s more that we will do,” Fed Vice Chair Richard Clarida told. There is “no limit” to the amount of bond buying the Fed can do, he said, adding that the Fed could also ease policy further with forward guidance and will keep its lending backstops in place as long as needed.

* U.S. producer prices unexpectedly fell in June as rising costs for energy goods were offset by weakness in services, pointing to subdued inflation that should allow the Federal Reserve to keep pumping money into the economy to arrest a downward spiral. Still, deflation remains unlikely as the economy battles depressed demand caused by the COVID-19 pandemic. The report from the Labor Department on Friday also showed underlying producer inflation ticked up last month. Deflation, a decline in the general price level, is harmful during a recession as consumers and businesses may delay purchases in anticipation of lower prices. The economy slipped into recession in February.

* Physical gold sold at a premium in India for the first time this year, driven by plunging imports and a near halt in smuggling that offset the impact of high unemployment and a rise in domestic prices across Asia that could deter buyers. India's gold imports dived 86% year-on-year in June because of record high prices and as international air travel was banned in response to the COVID-19 pandemic. In thin trade, dealers charged premiums of up to $3 an ounce over official domestic prices, up from last week's $22 discount. In top consumer China, dealers described trade as weak and quiet as they sold at hefty discounts of about $20-$25 versus global benchmark spot prices.

* Goldman Sachs expects gold to benefit if China, the world's top retail buyer, recovers much strongly from a second wave of COVID-19 cases than the United States, and reinforced its $2,000 an ounce target for bullion prices. The Wall Street bank recommended maintaining long positions in copper, silver, steel and gold, which are "both less exposed to areas with new outbreaks - Asia and Europe versus the Americas - and less exposed in the event of an outbreak." 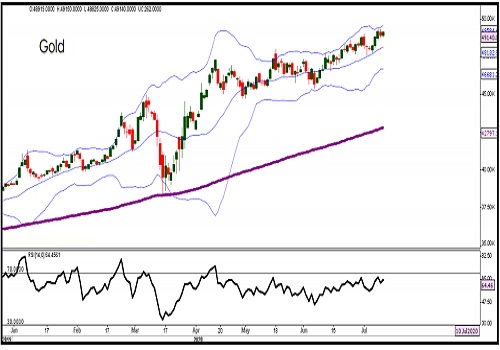 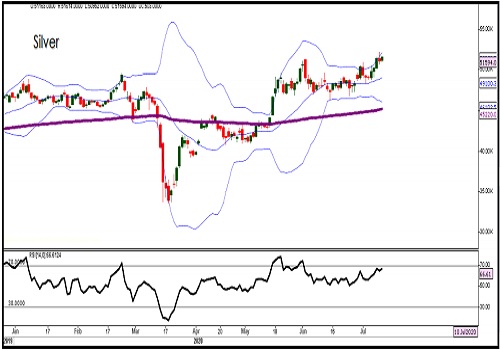 * Crude oil gained after the International Energy Agency (IEA) bumped up its 2020 demand forecast but record-breaking new coronavirus cases in the United States tempered expectations for a fast recovery in fuel consumption. The Paris-based IEA raised its demand forecast to 92.1 million barrels per day (bpd), up 400,000 bpd from its outlook last month, citing a smaller-than-expected second-quarter decline.

* Libya National Oil Corporation lifted its force majeure on all oil exports after a half-year blockade by eastern forces, but said technical problems caused by the shutdown would keep production low. The first tanker to load is the Kriti Bastion at Es Sider oil port, NOC added in a statement, and said it would "take a long time" to increase output due to "the significant damage to reservoirs and infrastructure" caused by the blockade.

* U.S. crude oil stockpiles grew last week and inventories on the Gulf Coast hit a record high as imports from Mexico rose to an eight-year high, the Energy Information Administration said on Wednesday. Distillate stockpiles, which includes jet fuel and heating oil, rose 3.1 million barrels to about 177.3 million barrels, their highest level since 1983, the data showed.

* U.S. crude oil imports from Mexico surged to the highest level in more than eight years last week as swelling inventories and a fire at the Latin American country's largest refinery in late June led it to offload more barrels. U.S. buyers boosted their purchases by 834,000 barrels per day (bpd) to about 1.3 million bpd in the week to July 3, the highest since February 2012, according to the Energy Information Administration. The surge helped send U.S. net imports last week to the highest since August 2019.

* Natural gas climbed on forecasts hotter-than-normal weather will keep air conditioners humming through late July. The higher price move comes despite a slow increase in output and a drop in liquefied natural gas (LNG) exports to their lowest since early 2018. Traders predicted that Tropical Storm Fay, which is heading for the New York City area, would likely have little impact on gas demand. 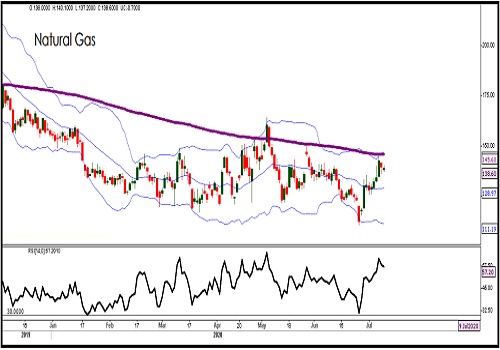 * Copper prices gained on resurgent demand in China and concerns over coronavirus-related disruptions to mine supply. Stronger-than-expected Chinese demand and COVID-related supply disruptions have led to a 30% decline in global visible inventories since March.

* China's major copper smelters boosted cathode production in June by 0.6% year-on-year to 699,000 tonnes. Large copper smelters in China are boosting output and taking market share from smaller ones that are closing. Overall smelting activity in China, the world's top refined copper producer, was only slightly down in June month on month despite a large number of closures.

* China's factory-gate prices fell at a slower-than-expected rate in June, official data showed, as the country works towards recovering from the coronavirus while grappling with a heavy blow to global demand. The producer price index (PPI) fell 3% from a year ago, according to National Bureau of Statistics data, but remains weak owing to the COVID-19 pandemic fallout. PPI has been at 4-year lows recently, shrinking 3.7% in May.

* Nickel demand expected to shrink 5-6% this year. Around 70% of global nickel demand comes from stainless steel mills, most of them in China. Others major end-users are companies in the aerospace and oil and gas industries, which have been hit hard by the pandemic. Nickel traded on the LME has to be at least 99.8% purity, while alloys such as ferro-nickel and nickel pig iron (NPI) contain significant amounts of iron.

* Primary aluminium ingot inventories in China extended a downward trend, and the days in inventory across social warehouses continued to reduce from the previous week, showed data. Social inventories of primary aluminium ingots across eight consumption areas in China, including SHFE warrants, decreased 7,000 mt from a week ago to 712,000 mt as of Thursday July 9, following a decline of 3,000 mt in the previous week. Inventories of aluminium billet in China declined this week due to a rise in shipments from warehouses in east China. 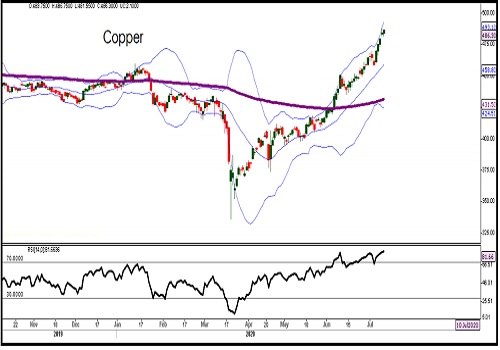 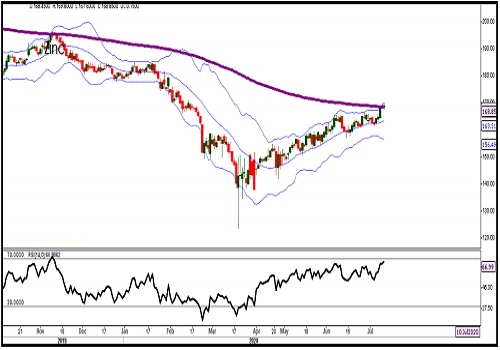 Update The yield on the benchmark 10 year Treasury yield rose to 0.549% - GEPL Capital