* Bullion prices gained as doubts over a swift global economic recovery and the Federal Reserve's pledge to hold interest rates near zero until at least 2023 supported the prices. Prices remained supported buoyed by a weaker dollar and lingering concerns over an economic recovery from the damage inflicted by the coronavirus pandemic that were underscored by elevated weekly U.S. jobless claims data.

* The Federal Reserve left interest rates unchanged and signaled rates are likely to remain at near-zero levels for years to come. The Fed announced its widely expected decision to keep the target range for the federal funds rate at zero to 0.25 percent. The central bank said it expects rates to remain at current levels until labor market conditions reach levels consistent with maximum employment and inflation has risen to 2 percent and is on track to moderately exceed 2 percent for some time.

* The Bank of England retained its interest rate at a record low, but policymakers started to assess how negative interest rates work amid talks on post Brexit trade deal, the recent rise in Covid-19 cases and the rising risk of elevated unemployment. The nine-member Monetary Policy Committee unanimously decided to hold the interest rate at 0.10 percent, as widely expected. The bank had altogether reduced the rate by 65 basis points at two unscheduled meetings in March. Policymakers also unanimously decided to retain the size of the asset purchase programme at GBP 745 billion.

* After reporting a substantial increase in new residential construction in the U.S. in the previous month, the Commerce Department released a report showing housing starts pulled back by much more than expected in the month of August. The housing starts tumbled by 5.1 percent to an annual rate of 1.416 million in August after soaring by 17.9 percent to a revised rate of 1.492 million in July. The Labor Department showed first-time claims for U.S. unemployment benefits fell less than expected in the week ended September 12th. The Labor Department said initial jobless claims slipped to 860,000, a decrease of 33,000 from the previous week's revised level of 893,000. 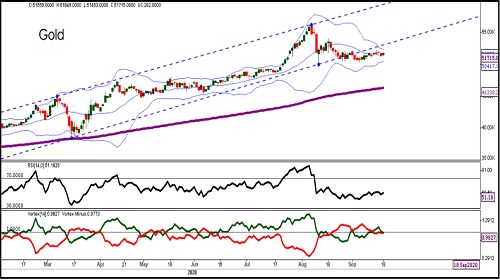 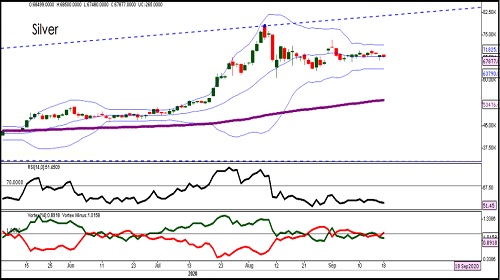 * Saudi Arabia’s crude oil exports bounced back to 5.73 million barrels per day (bpd) in July from 4.98 million bpd in June, official data showed. June’s exports were the weakest recorded in data stretching back to 2002. Monthly export figures are provided by Riyadh and other members of the Organization of the Petroleum Exporting Countries (OPEC) to the Joint Organizations Data Initiative (JODI).

* The Saudi Energy Minister warned traders against betting heavily in the oil market saying he will try to make the market "jumpy" and promised those who gamble on the oil price would be hurt "like hell". The comments by Prince Abdulaziz bin Salman, OPEC's most influential minister, came after a virtual meeting of a key panel of OPEC and allies, led by Russia, known as OPEC+.

* Natural gas dropped after last week's storage build was bigger than expected, keeping stockpiles on track to reach a record high by the end of October. Prices were down on expectations output would start to rise from a two-year low as producers return wells shut-in for Hurricane Sally and on forecasts calling for lower cooling demand over the next two weeks.

* The U.S. EIA said utilities injected 89 billion cubic feet (bcf) of gas into storage in the week ended Sept. 11. That is higher than the 79-bcf build forecasted poll and compares with an increase of 82 bcf during the same week last year and a five-year (2015-19) average build of 77 bcf. The increase boosted stockpiles to 3.614 trillion cubic feet (tcf), 13.2% above the five-year average of 3.193 tcf for this time of year. Data provider Refinitiv said output in the Lower 48 U.S. states was on track to rise to 85.3 billion cubic feet per day (bcfd) from a two-year low of 84.8 bcfd on Wednesday due to Sally-related shutdowns. 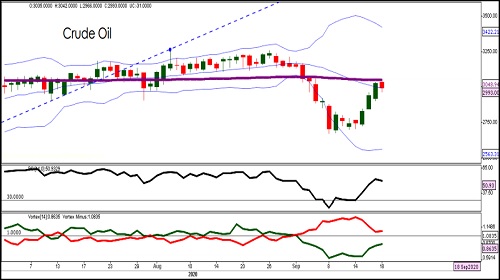 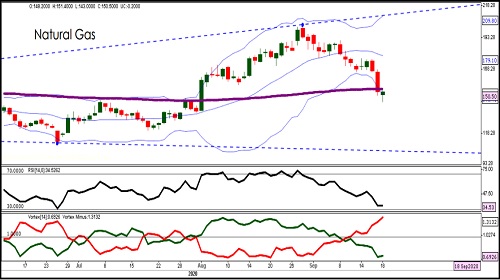 * Copper gained buoyed by a weaker dollar and strong fund buying on hopes that Chinese stimulus would spur demand in the world's biggest metals consumer. Data showed recovery in the U.S. labour market stalling and amid disappointment that the Federal Reserve made no new monetary easing commitments at its meeting. Demand for refined copper in China continues to ease, with premiums falling $4.50 to $59, data showed, extending a decline from highs of $100 six weeks ago. That is the lowest since the start of April.

* LME cash copper prices have traded around $25 higher than three months prices in the backwardated market structure that suggests low copper stocks in markets outside of China. Stocks of copper in Shanghai bonded areas increased for the seventh consecutive week, as domestic consumption remained weak. Data showed that the stocks expanded 11,500 mt from the prior week to 276,500 mt as of Friday September 18. China’s copper cathode output rose sharply in August due to minimal maintenance and ample supply of copper scrap.

* Zinc prices gained as resurgent Chinese industry bolstered the outlook for demand. Prices of the metal used to galvanise steel are up 34% from their low in March as manufacturing, steel production and infrastructure building accelerate in China, the largest consumer. The OECD upgraded its forecast for the global economy this year to a 4.5% contraction from a 6% contraction. Zinc inventories in LME-registered warehouses have risen to 219,625 tonnes from 50,000 tonnes in January, but stocks in Shanghai Futures Exchange sheds have slipped to 58,453 tonnes from 170,000 tonnes in March.

* The discount of cash zinc to the three-month contract on the LME shrank to $21.40 a tonne from $31 earlier this month, suggesting tighter nearby supply. The roughly 13 million tonne a year zinc market saw a 205,000 tonne surplus in the first six months of 2020, the International Lead and Zinc Study Group said last month. China’s refined zinc output stood at 509,100 mt in August, rising 16,300 or up 3.3% on month and up 1.98% on year. Output totalled 3.87 million mt in the first eight months of this year, up 3.68% from the same period last year.

* Aluminium investors remained on edge about the outlook on further coronavirus stimulus as well as the timing of a viable vaccine. Primary aluminium ingot inventories in China declined moderately, showed data. Social inventories of primary aluminium ingots across eight consumption areas in China, including SHFE warrants, decreased 24,000 mt from a week ago to 740,000 mt as of Thursday September 17. Imports of unwrought aluminium alloy stood at 131,000 mt in June, rising 88.3% from May and surging 754.5% from a year earlier, and totalled 466,500 mt in the first half of 2020, soaring 706.1% from the same period last year, according to the latest customs data. 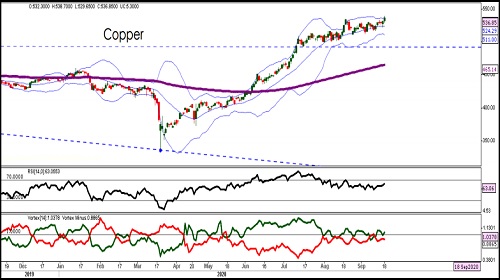 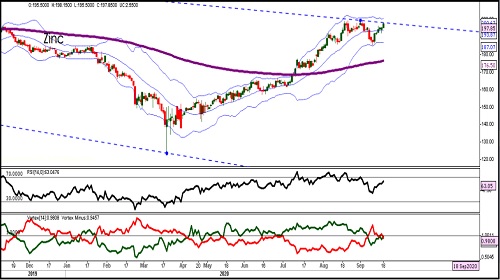