MCX Natural Gas prices traded mixed to bearish during the last couple of weeks and closed at Rs.163.9/mmbtu by 13th June. Compared to Rs.191.4/mmbtu reported on 17th May, it is lower by 14.37%. Lower demand/usage in the India especially in the fertilizer sectors due to delayed monsoon eventually brought down the prices of Natural gas. Similarly, decline of 12.72% has also been witnessed in NYMEX Natural Gas futures during the above period as price closed at $2.325/mmbtu by 13th June. Weather conditions had been near normal in the United states due to spring season, which also led to lower demand in the power and the residential/ commercial sectors.

Fundamentally for the coming month, we are expecting global Natural gas prices to trade sideways to bearish owing to pull back in crude prices globally and near normal temperatures in the United States. Near normal temperatures are expected to keep the demand for Natural gas to be mixed to weak. Moreover, prevailing higher Natural Gas supplies on a weekly and yearly basis as compared to the demand is likely to keep the pressure in the futures prices. Furthermore, near normal temperatures are estimated to continue in the United States based on U.S. CPC (Climate Prediction Center), which is likely to keep the overall demand in the above mentioned sectors down. Moreover, the inventories of 2088 billion cubic feet reported on 7th June are currently at a seasonal rise which are forecasted to keep Natural Gas Futures weak. In the Indian scenario, poor and delayed monsoon so far has not significantly increased the demand for natural gas in the fertilizer sector. Likewise, the demand for natural gas in the power sector is also forecasted to be lower as the temperatures are near normal. However, the above factors can be reversed in case crude prices showcase significant uptrend in the global markets due to ongoing geopolitical tensions.

On a weekly timeframe, MCX Natural Gas price has been falling down from last couple of week, where price has breached its multiple support of Rs. 170.70 and sustained below it. Which indicates more bearishness in the counter. Moreover, price has moved below “Ichimoku Cloud” with negative crossover between lead1 and lead1 line, which may initiate a more selling pressure for medium term. Additionally, price has also sustained below 50 DEMA and 100 SMA, which will keep the prices under pressure. However, daily chart has formed “Bullish Harami” Candlestick pattern, which is a bullish reversal and witness an upward trend but fundamental factors are not supporting the bullish trend so upside rally would be capped. Hence, we are recommending sell on rise strategy for long term. For short term prospect, one can initiate a short position in MCX Natural Gas (July) around 175/178 for the downside target of Rs.145/138 levels. However, the bearish view can be reversed if MCX Natural Gas (July) close above the resistance of Rs.190. Overall, we maintain our bearish view in Natural Gas (July) for the next one month. 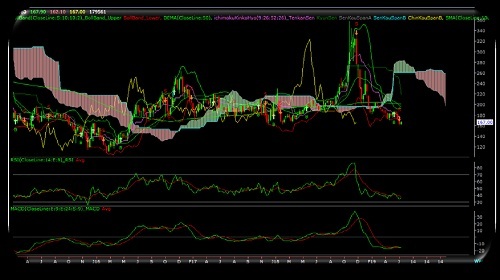 Nifty has an immediate support at 11150 - Nirmal Bang