NCDEX Turmeric Future price has traded mixed to bearish during the month of May and closed lower by 4.43% at Rs.5352/quintal on 28 May compared to Rs.5600/quintal as on 30 April. Lack of demand due to nationwide lockdown situation and no major auctions being conducted in Nizamabad market led to downtrend in turmeric future prices. Moreover, reports of higher carry forwards stocks from last year due to higher production also led to dediine in prices in the past couple of weeks. State of Tamil Nadu and Andhra Pradesh has also ample amount of stocks which eased worries in the domestic market.

Fundamentally for the month ahead, we are estimating NCDEX Turmeric futures to witness pull back, as the last 5 years historical seasonal factors indicate for a fresh buying in the coming months (June to August) which is the sowing period. Moreover, positive pre-monsoon reports by IMD has improved the sentiments for higher sowing in the June-August months of the current year in Telangana, Tamil Nadu and Maharashtra. This is expected to bring lower supplies in the coming months as farmers are expected to be engaged in the same. In addition, locusts attacks in the northem regions of Indian can create worries in the southern states as locusts usually breed in the monsoon season. Current lower prices of turmeric can lead to crop switch to Soybean and Cotton for sowing in the above states as well. However, major upside can be capped as turmeric exports continue to remain lower on a monthly basis. As per Department of Commerce, turmeric exports for the period April to January 2020 has been reported at 110,399.27 tonnes, lower by 25.83% compared to 138,920.39 tonnes of the, last year. Overall, we are estimating bullish with sowing correction trend in NCDEX Turmeric futures for the month ahead. 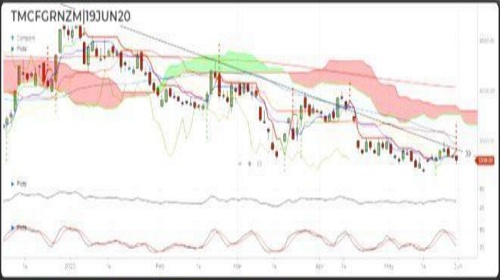 On the daily timeframe, NCDEX Turmeric (june) has sustained below its “Ichimoku Cloud” which confirms that the bears are in control. Moreover, Super Trend (7,1) is giving a fresh sell signal which signals weakness in the counter. Furthermore, price has sustained below its 20°50 “Simple Moving Average”, which indicates bearish dominance, Additionally, momentum indicator RSI (14) has breached below its 50 level which suggests negative momentum. Also, momentum indicator Stochastic (6) has shown a negative crossover, which confirms bearish influence in the counter. So, based on the above technical structure one can initiate a short position in NCDEX Turmeric (June) future at CMP 5308 or a rise in prices till 5360 levels can be used as a selling opportunity for the target of 4600. However, the bearish view will be negated if NCDEX Turmeric (June) closes above the resistance of 5700.

Infosys flies techies, families to Bengaluru from US